Brandie Wilkerson is just back from Switzerland where she met parts of her family. Born in Switzerland, playing for Canada, sometimes living in the United States and having triple citizenship of the aforementioned countries, Brandie is a beach volleyball gypsy.

“Basically I am a gypsy right now. I literally don’t have a home. I don’t have an apartment in any country right now. I move a lot, I travel a lot, even on my downtime. It has always been like that for me. My family moved countries al lot. This world just seems too big to just do the same thing all the time.”

Putting the pieces together

Now she is sitting in a Skybar in Vienna (Austria), looking at the impressive St. Stephen’s Cathedral and comtemplating the ongoing season. Not having won a World Tour medal in previous seasons, this year Brandie and her partner Heather Bansley won bronze at Itapema (Brazil), silver at Ostrava (Czech Republic) and finally gold at Warsaw (Poland). Winning bronze at the Gstaad Major in Switzerland mid-July, she is now ready for the big goals. 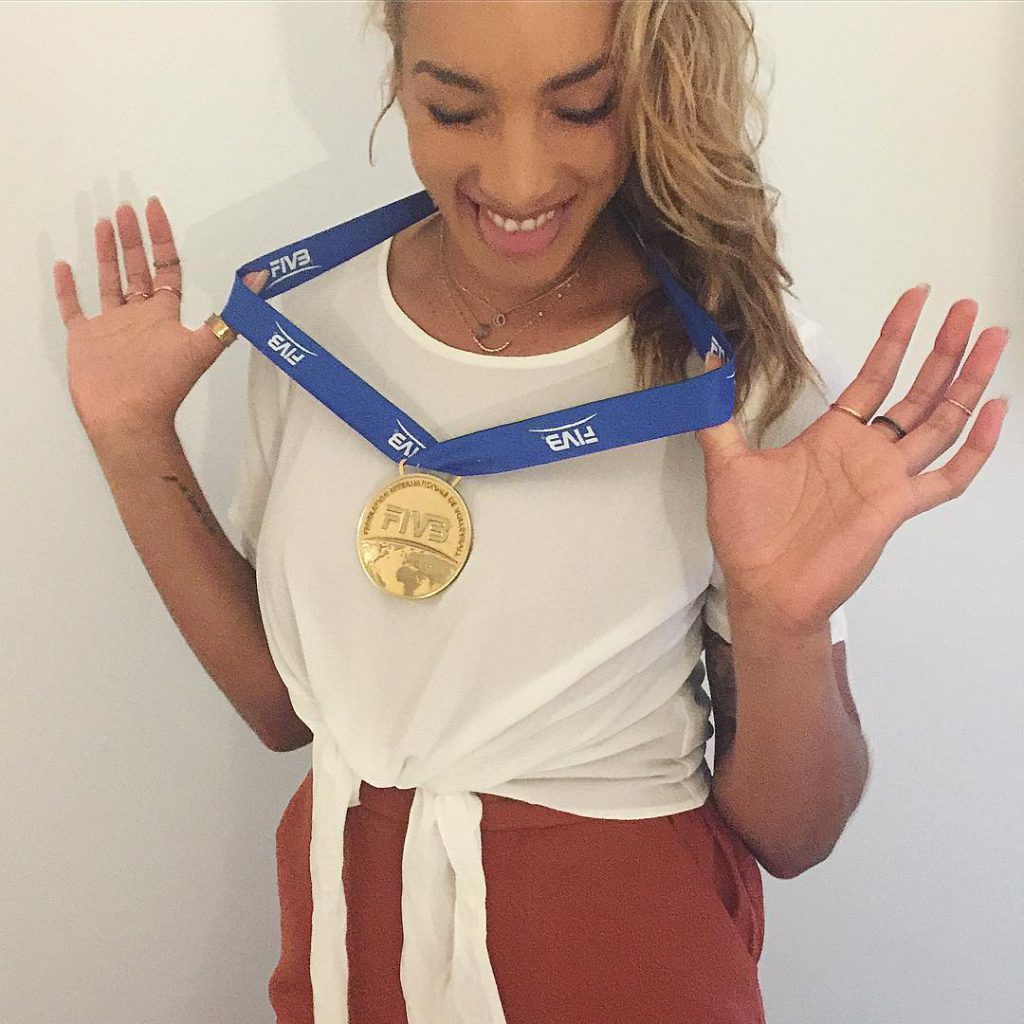 Brandie and her first gold

“I think it has just been a matter of time. Last year was my first opportunity to play on the World Tour as a main draw player. It was kind of trying things out. And now that I understand my competitors and understand what I need to do and have had so much support from Canada and been putting in lots of work in the off-season, it was just a matter of time to let me grow. It was just putting the pieces together.”

Being a vegetarian and taking care of her body as a priority has helped her to find a balance between her diet and what is best for her as an athlete. Playing FIVB and AVP events, she is usually running on a tight schedule:

“Listening to my body, my decisions to play AVP is with the full support of my partner and coach.” 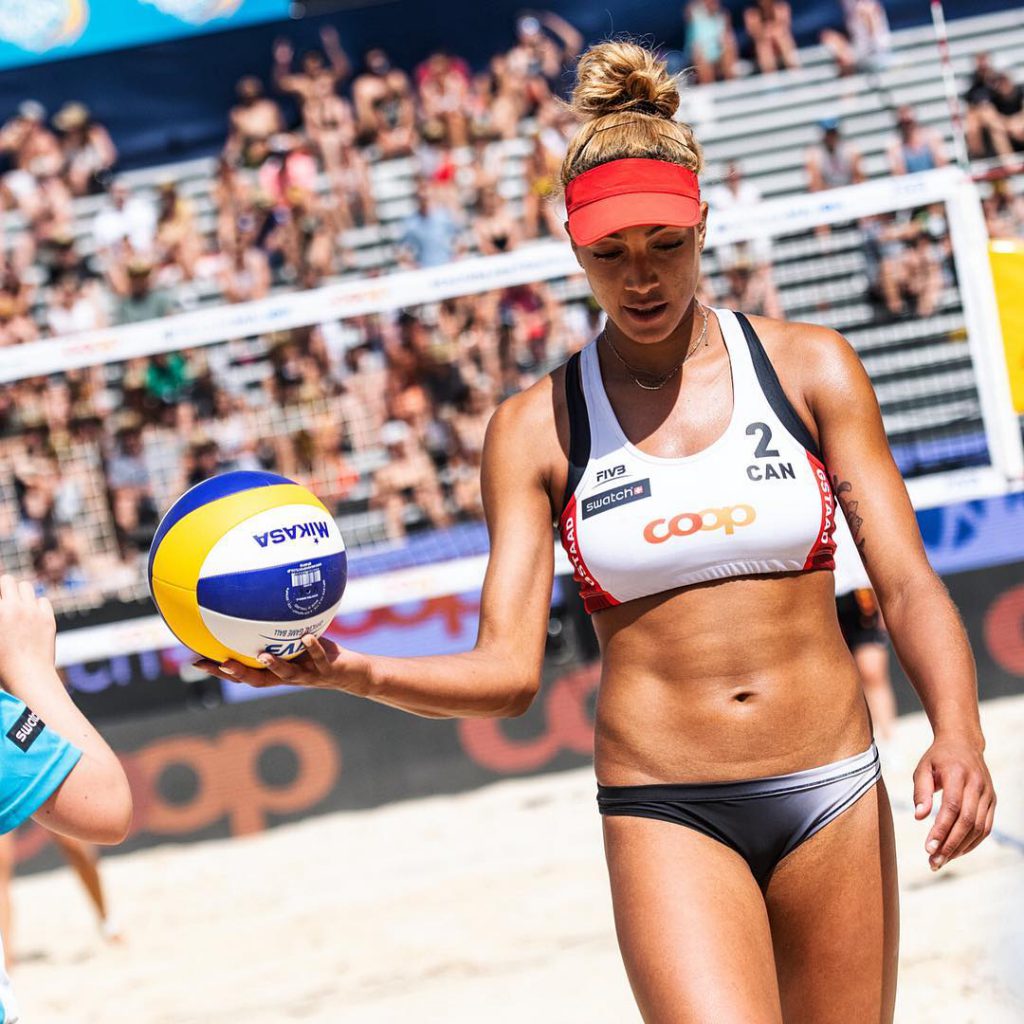 Getting ready to serve

Becoming an athlete was never a childhood dream

Although starting in indoor volleyball, Brandie had to learn beach volleyball as a new sport.

“I started playing volleyball pretty late, I was about 17, 18 years old. In indoor, I played right side, I didn’t pass, I didn’t set, just hitting and serving. And then I tried beach to be able to learn those skills that I was missing. I have definitely been able to use my athleticism to help me speed up. I didn’t play that much volleyball that I was set into a certain technique or indoor game that would make transitioning extremely hard.”

Since it was a demanding challenge to learn all the beach volleyball skills, she loved it.
Unlike you might expect, for Brandie becoming an athlete wasn’t a childhood dream. Even both her parents, a former NBA player and a professional athlete, were rather pushing her away from sports in order to focus on studies and a career.

“I had no intention of playing professional sport for a long time. But it was kind of something that if it was meant to be, it’ll just happen. It wasn’t something I wanted to do as a kid.”

Both Canadian top teams aiming at the Olympics 2020

The overriding goal for Brandie and her partner Heather Bansley are the Olympics 2020.

“Within our team, we focus on every moment as it comes and not try to think too far ahead. And at the same time balance it with the work we need to put in now to be able to get to where we want. So obviously 2020 Olympics and medaling there, that is the big goal. But there are so many steps before.”

With Brandie and Heather and the second Canadian top team Pavan/Humana-Paredes, there are currently two Canadian teams leading the FIVB World Ranking.

“It is amazing to have the number 1 and 2 spot in the world be in Canada. And we do push each other in that way because it’s interesting being countrymen but at the same time competitors. I want that both of us be out there at the Olympics doing their best.” 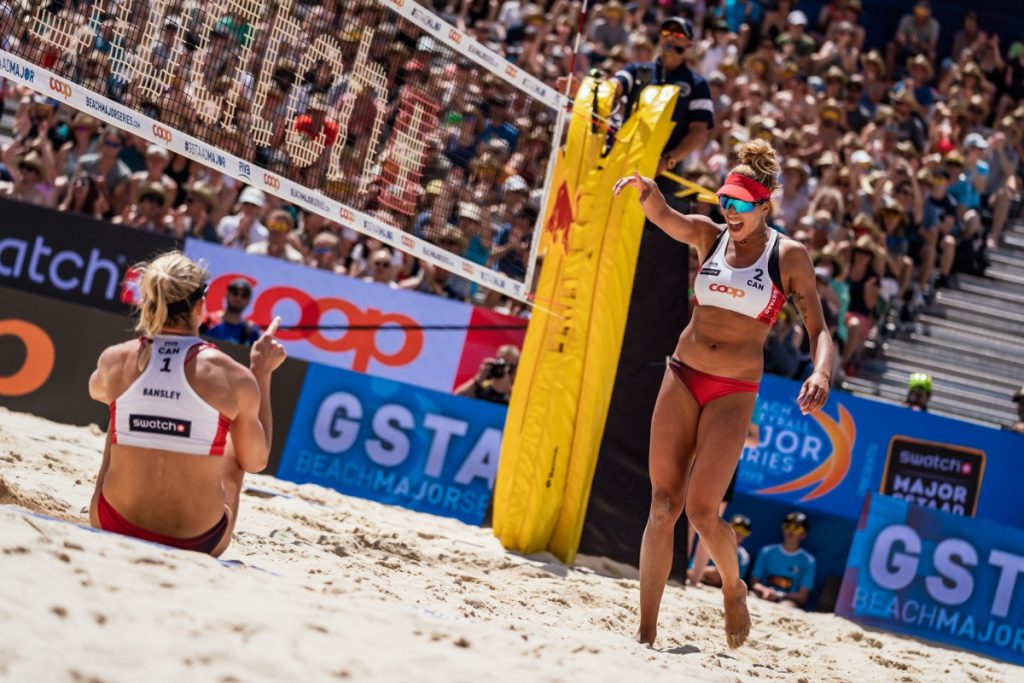 With the top 5 teams on the World Tour winning tournaments consistently, competition among the top teams is rather fierce plus a few surprise teams like Japan’s Megumi Murakami and Miki Ishii further adding to the competitor base.

“There is so much more about the sport than being tall and hitting a ball hard. It is also about being creative and owning a style. And even your mental game and the support you have with your partner and executing a game plan make beach volleyball really interesting. I wish people watching understood. Some people just see the ball moving but they don’t understand how much more is behind it.”

Asked for her favorite players, Brandie easily comes up with some legendary players on the men’s side:

“I have always loved Phil. To be playing for that long and have such a presence on the court is amazing. He is such a smart blocker, someone that uses their size not just because they’re tall but very well-placed and veteran-style. He is also authentically himself…Bruno is another one, undersized but the most amazing side-out player. Evandro’s serving is also impressive.” 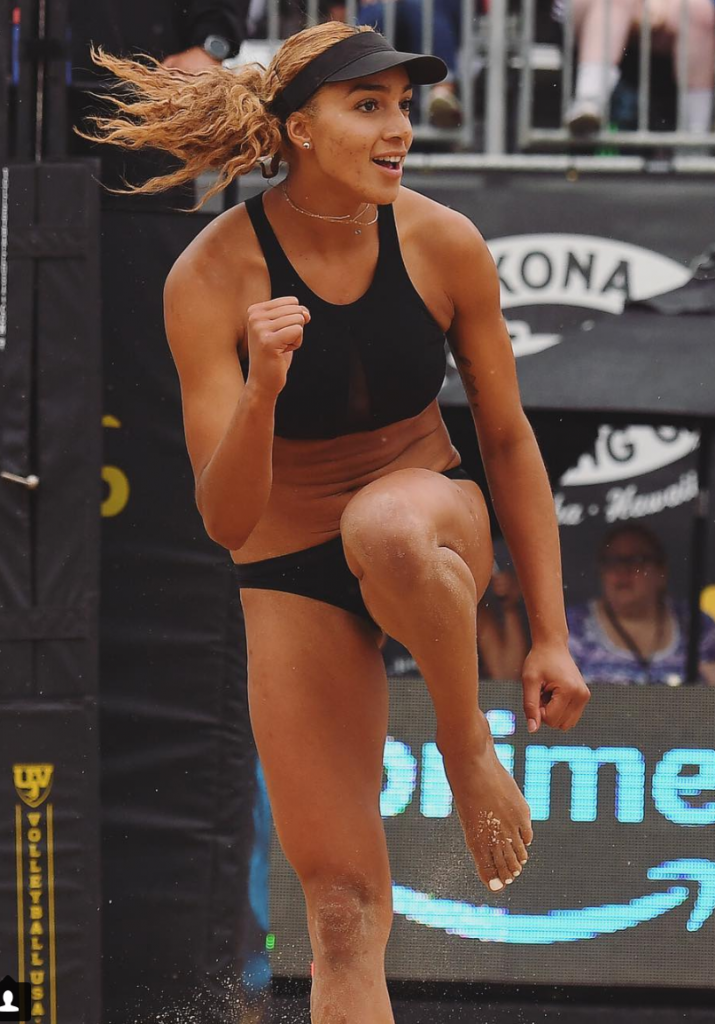 About staying present and being gypsy

When you watch Brandie playing, in most cases you will see that she is having fun in the process, even smiling when things don’t go well:

“I am just so much about staying present and it is hard for me to stress about things. I am in a game and losing sucks but in that moment, I am doing everything I can. If playing volleyball is the worst thing going on for you, then I don’t think you have any real problems.”

Having her own approach to things off-court as well, you might wanna call Brandie a free-spirited, creative mind who looks at things in their own way. So what does a beach volleyball gypsy do if there is no volleyball?

“If for real I didn’t play volleyball, I would wanna have a farm or live somewhere by myself in the middle of nowhere. That’s why all my friends just call me a gypsy.”