Latvia is a passionate and talented beach volleyball nation and we’ve already talked to some of their greatest players when interviewing Lion King Aleks Samoilovs and reigning European Champion Tina Graudina. In today’s post, one of Latvia’s young guns will introduce us to blocking strategies in beach volleyball. Gleb Kolyada has taken top places in Latvia’s U17 & U19 national championships and has participated in the strong Latvian national tour several times. He has been learning from Edgars Tocs, one of the most renowned beach volleyball blockers in the world. Gleb has recently created BeachVolleyballGuides, an educational beach volleyball site gathering inputs from professional beach volleyball players. 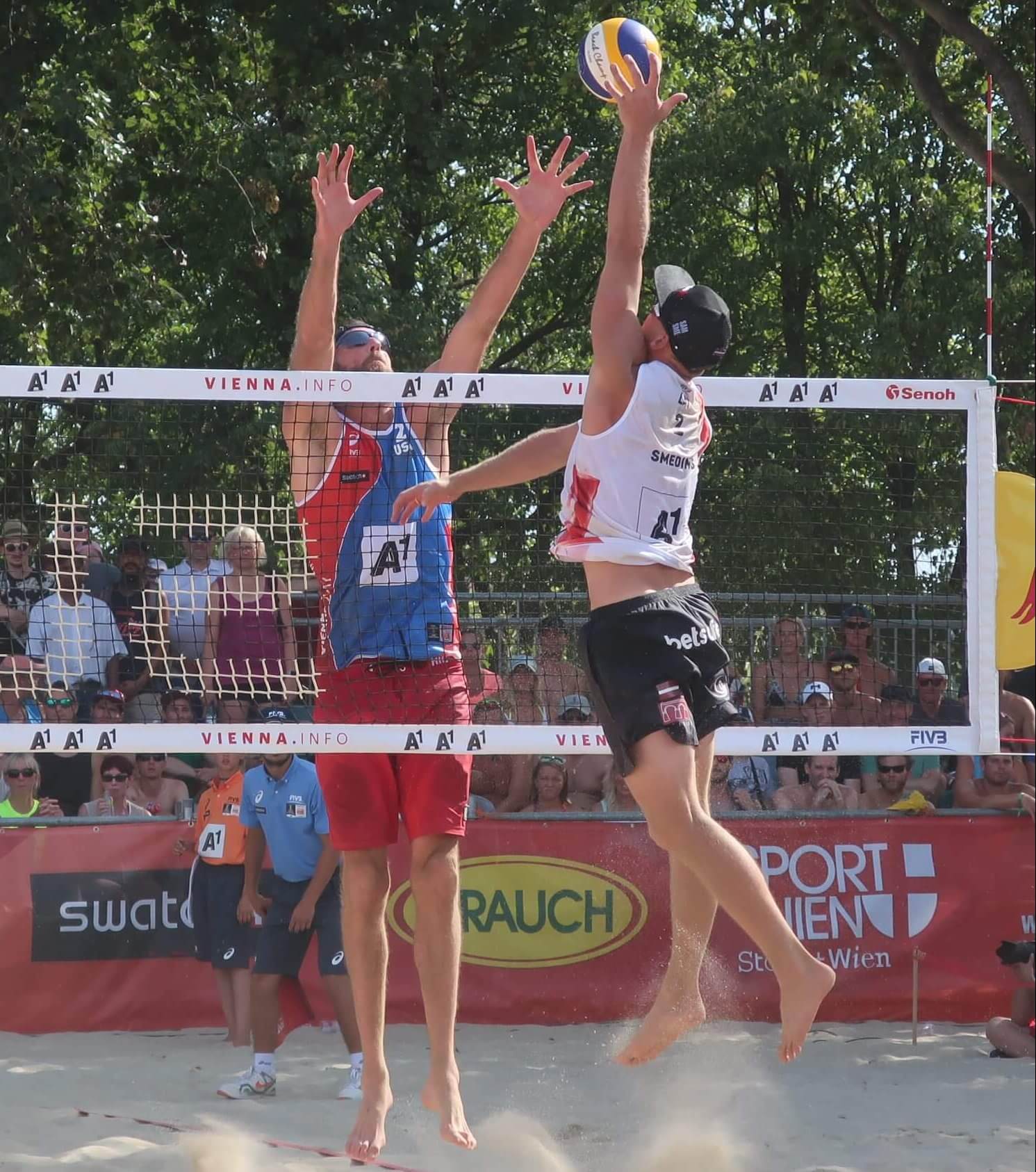 A blocker in beach volleyball is quite similar to a goalie in other sports. It is the blocker’s job to stop the ball from crossing the net entirely and simplifying the job for your talented defender.

There are three ideal cases for a beach volleyball blocker. The first and the best-case scenario is if the blocker is able to fully block the ball and send it directly into the ground on the opposing side of the net. This is what all blockers are ultimately striving to accomplish. The second case occurs if the blocker manages to touch the ball and reduces the speed of the attack or creates a better trajectory to give more time for the defender to chase after the ball. If, as a blocker, you have done that, then you have succeeded at your job!

The third scenario for the blocker revolves around taking away space from your opponent. You have to be able to position yourself accordingly so that your opponent will feel your presence and feel psychologically inclined to avoid hitting in your direction. Say, for example, your opponent is approaching for a strong line spike and notices that you are prepared to explode and block line. By creating an impenetrable wall, you significantly reduce the opponent’s options. The attacker will be left with limited go-to actions, allowing your defender to take up a good position and be ready to dig the ball.

In other words, as a blocker, you have completed your job: you reduced the number of attacking options that your opponent has and made the job for your defender easier. Even though you have not directly touched the ball, you still have positively impacted the outcome of the rally.

Being a good blocker is more than simply being tall and strong. And while undeniably these factors can help, a good, actually great blocker has much more than that. He has good timing, superior blocking vision, and an admirable psychological understanding of his opponent.

So let us dive into the basics, so you will grasp some initial concepts of beach volleyball blocking!

There are certain basic strategies that are taught when you begin training beach and are getting ready to become a blocker. These strategies revolve around the three cases described above and the synergy between the blocker and the defender. To use these strategies, beach volleyball players rely on blocking signals as a means of communication. 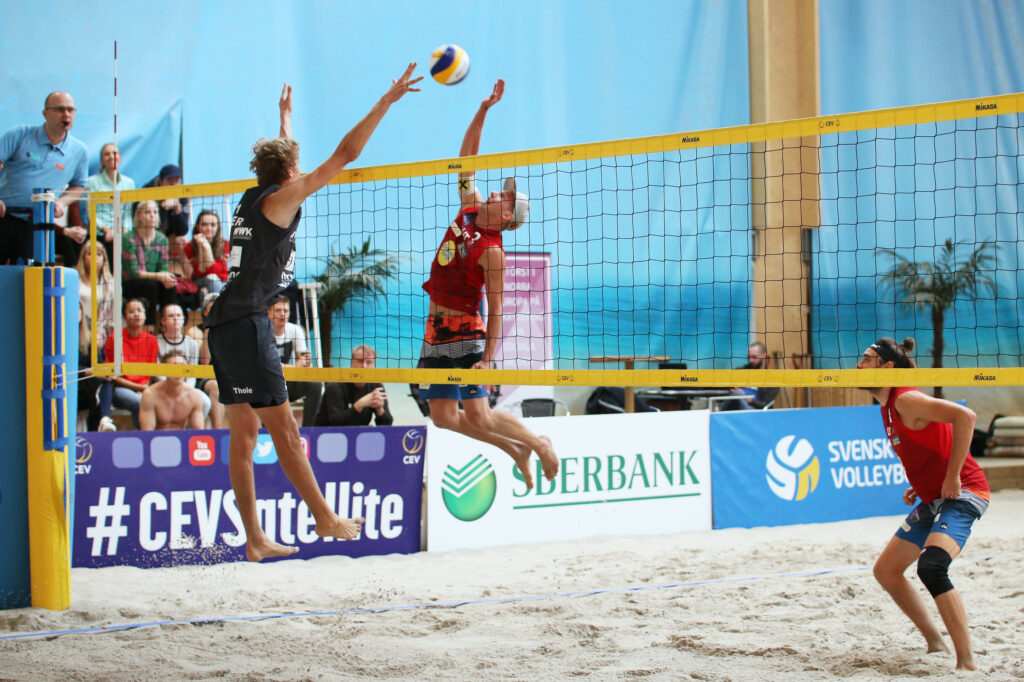 There are four basic strategies that you should know to have success in the blocking universe. 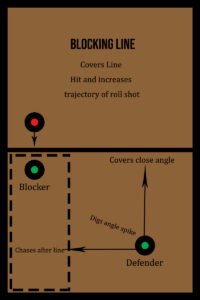 This is the most used blocking strategy in the sport. When the team decides that they are going to use this strategy, the blocker will be responsible for preventing the opponent from spiking directly into the line and attempt to cover a line roll shot. He does so by positioning himself in front of the attacker, with the opponent’s dominant hand being the focus of the blocker. If the action occurs on the left side of the court, then the blocker’s right hand should be positioned approximately on the same line as the opponent’s dominant hand. And if the attacker is approaching from the right side, then the hand positioning is reversed. In this manner, the hand that is closest to the sideline will stop the strong line spike and he will still have the ability to adjust to an angle spike if needed. By blocking line, your defender will take up a position diagonal of the opponent. It will be his job to dig a strong angle hit and chase after the close angle shot or the long line shot. 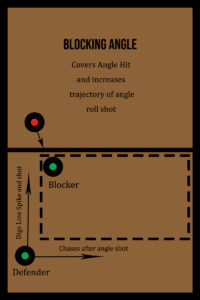 This strategy is used slightly less in beach volleyball because it makes defending significantly harder. However, teams rely on this strategy when they are facing a dominant opponent that is able to continuously spike angle and the defender is unable to reach and dig the ball. Then it becomes the blocker’s job to stop the opponent from spiking angle and it becomes the defender’s job to cover the line. If that would be all that the blocker has to do, then this strategy would be as effective as the “blocking line” one. However, by placing the block on the angle, there becomes significantly more area behind the blocker that the defender must be able to cover. Essentially, what this means is that at the expense of defending potential, the team reduces the power of the opponent’s attacks. To employ this strategy successfully, you as a blocker, must position your hands in the opposite manner from the “blocking line” strategy. So, if the opponent is approaching from the left side of the court, your left hand will be positioned on the ball itself and your right hand will be covering the angle spike. If you do this correctly, then you should with a certain degree of success also be able to cover some portion of the line spike. And similar to the previously described strategy, when the sides are switched, your hand positioning should be reversed, with the right hand being on the ball and the left hand covering the angle spike.

This strategy is practically the last case scenario for the team. What it dictates is that you, as a blocker, will attempt to block a strong spike, regardless of where it is going. You should already see a problem with this tactic. It arises from the lack of defined responsibility for the defender. By blocking the “ball”, you are essentially improvising and are adjusting to the rally as it is. It must be noted that when the ball is set on the tape, this strategy should be the one employed to close off all spiking potential of the opponent. As a blocker, you should be centered across the dominating hand of the opponent and as you explode, have the ball be in the center of your hands.

Pulling from the block 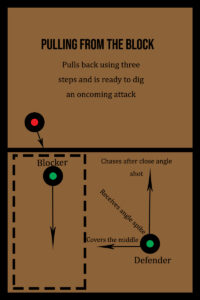 In this strategy the blocker backs off from the net in an attempt to pick up the ball that has been rolled or spiked over. It is employed primarily when the set is rather bad and the opponent does not have an opportunity to spike the ball with full force. Additionally, it can also be used as a psychological diversion to trick your opponent into rolling the ball into your hands. However, if you pull from a block too early and the set turns out better than you expected, then be ready to get screamed at by your partner for allowing the opponent to slam the ball down recklessly.

What are Blocking Signals?

Blocking signals are the method of communicating your strategy with your partner. They are shown on the lower back or the buttocks of the player showing the signal. These signals allow the players to separate the court area between themselves accordingly. Consequently, by showing these signals, the players are able to understand their responsibilities and adjust their positioning.

1 Finger: This signal corresponds to the line blocking strategy.

2 Fingers: This signal corresponds to the angle blocking strategy.

3 Fingers: The blocker will show that he is blocking the angle of the opponent and in the last moment jump and block the line instead.

4 Fingers: Opposite of the 3 finger signal, the blocker will show that he is blocking line, thus baiting the opponent to spike angle, and in the last moment jump to block the angle.

Open Hand: The blocker will not block and will pull from the net. However, other teams may interpret this signal as the blocking the “ball” signal.

Closed Fist: This refers to the blocking the “ball” strategy but can be switched with the open hand signal.

Pinky and thumb: The blocker will proceed to jump and block wide, meaning that he will spread his arms to catch both sides of the spikes. This strategy is mostly employed when the opponent is approaching through the middle and has the freedom of hitting to either side of the court.

Defender’s Role Based on Signals

The blocking signals allow both, the defender and the blocker to understand their respective roles. As the signal changes, so does the strategy!

Now we will discuss how the strategy differs based on the signal that is being used.

Blocking Line: When the blocker is showing one finger and is employing the “blocking line” strategy, the defender is responsible for positioning himself so that he is able to dig a strong angle spike while simultaneously covering close diagonal and the line roll shot. As soon as the attacker approaches, the defender needs to plant his feet into the ground, stay on his toes, have his shoulders facing the attacker and be ready to react.

Blocking Angle: When this strategy is used, the defenders job is practically reversed. After service, the defender maintains a central position, and after the set he moves onto the line attempting to dig the ball. As a defender, you should be expecting a strong line hit and be ready to cover a long angle roll shot. This tends to be rather difficult in practice!

Open Hand: As the blocker is pulling from the net, the defender must maintain his position and expect to be covering either a strong hit or a line shot. One important thing to note about this strategy is that the center becomes a weakness and you and your teammate should discuss on who will be responsible for digging the ball if it is placed in the middle.

Being a blocker requires immense amounts of practice. Thousands and thousands of repetitions! It is more than simply jumping and trying to reach the ball. And while that’s a factor, there is so much more to it: how to place your hands correctly, how to bait an opponent into hitting into your block, etc… For you to become good you must practice and learn to implement the different strategies that you encounter throughout your beach volleyball career.