The mastermind behind Mr. Skyball

It sounds like a fairytale. Less than 24 hours before the first match, Italians Adrian Carambula and Enrico Rossi get the final confirmation that they are going to participate in the Hamburg World Championships. Replacing a team from Sierra Leone who couldn’t make it to Hamburg due to visa issues, the Italians immediately get flights to Hamburg to make it to their first match against Qatar on time. Taking the spot of Sierra Leone seeded number 45, Carambula and Rossi play in Pool D that sees four strong teams competing for two direct spots in the elimination round. Qatar’s top team Ahmed/Cherif, Ostrava silver medalists Perusic/Schweiner (Czech Republic), strong Belgian Koekelkoren/ van Walle and the Italians – probably the strongest pool in the whole tournament.

Only the new world champs stop the Italians

But Rossi/ Carambula accept the challenge. Losing to Qatar only in the tie-break (16:18) and beating both the Czech and the Belgian, they advance to the knock-out stage as runners-up in their pool. But the journey continues. They defeat Swiss team Heidrich/Gerson and then strong Austrians Seidl/Waller in straight sets. Only in the quarterfinal, the Azzurri are stopped by Viacheslav Krasilnikov and Oleg Stoyanovskiy, the later World Champions. Their coach Marco Solustri is thrilled:

“This tournament was like a dream. From not participating at all, we went to 5th place. And we collected lots of points for the Olympic race. It is still a long way to go to the Olympics but we are up and running.”

Marco was a successful World Tour player during the 80s and 90s. He coached teams from Italy, Austria and Russia in the Olympics, guided compatriots Bruschini/ Solazzi and Perrotta/ Gattelli to three and Team Austria to two gold medals in the European Championships. He is also one of the early pioneers of European beach volleyball and founded the first Italian beach volleyball school in Rome. The Italian veteran is now coaching Carambula/Rossi outside of the Italian volleyball federation’s national program. In March, the team had a great comeback on the international scene with a silver medal at the FIVB 3-star in Sydney. 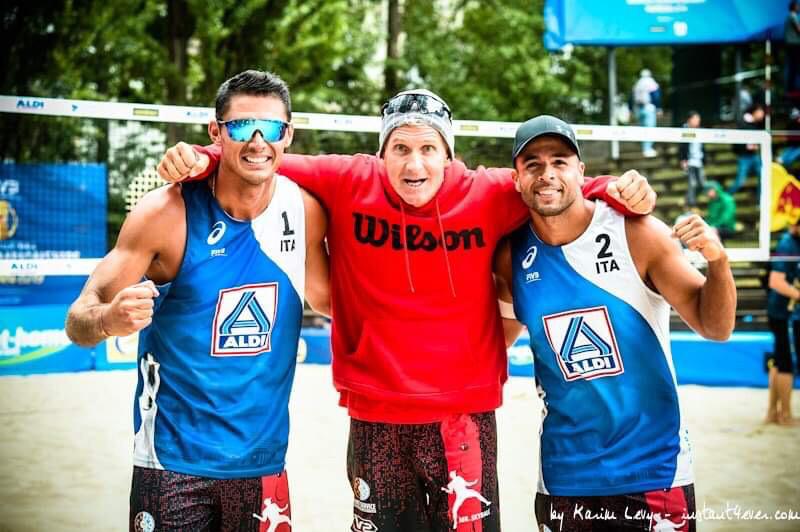 Marco with Enrico (left) and Adrian (right) in Hamburg

“With Adrian’s height at 1.80m, you have to emphasize his peculiarity, his technical skill, his ball control. And he is really a fighter. The more the game is difficult, the more he feels excited about it. He has no fear. He is a small guy but as soon as he steps on the court, he’s tall. He is proud. The way he presents himself, it is just clear that Adrian Carambula is playing and his opponents can feel it.”

Marco is now working on aligning these great skills in a system without losing the creativity und uniqueness of Adrian’s style. How did Adrian develop his style?

Born in Uruguay, Carambula started playing football as a kid, for some amount of time even in the same team as Uruguay’s football hero Luis Suarez. When he moved to Florida as a teenager, he went to the beach, just playing volleyball for fun. No coach, no structure, just watching other players and trying to find his own style. One can be sure that the outcome of this approach to beach volleyball is a different one than going to the gym, playing indoor volleyball and having a coach.

“If you combine these characteristics from the street like peripheral vision and creativity and put it in a system, you can become a real champion like Adrian is now.” 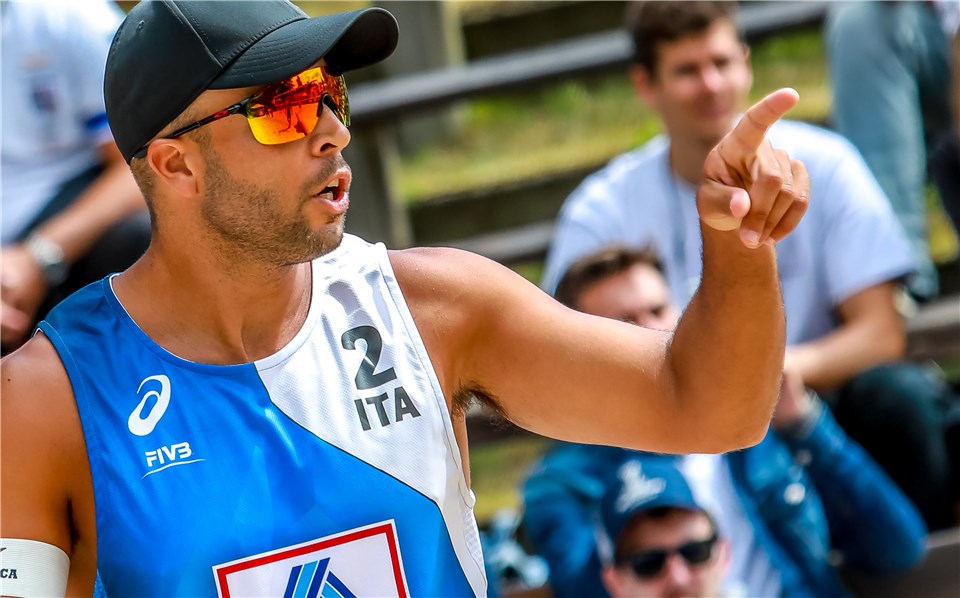 Talking about the world championships in Hamburg with tall blockers dominating the scene and winning the medals, Marco has his own perspective.

“The key to be a good beach volleyball player is being quick and have a good ball control. Then of course, having those two skills, 210cm is better than 180. With two out of the three qualities, you might be able to go to the top, with three you can for sure. For example, Phil Dalhausser has it all. Big guy, very fast, unbelievable skills with the ball. He has been the best player in the last 10 years and only recently other players came up to challenge him.”

And Marco also emphasizes the mental aspect that has probably been the key success factor for American surprise team Tri Bourne and Trevor Crabb that doesn’t fit into the “tall blocker theory”. The US boys have been split-blocking during the entire tournament.

“Tri and Trevor are fast and have good ball control skills. They are not huge but they have a strong mind. In general, most American players are confident, have a can-do-it-mentality, it is in their culture. They think they are a little bit better than they really are. But in sports an overdose of confidence is better than an underdose.”

Tri and Trevor proved their mental strength with several turnarounds in the tournament. Losing the first set almost per default, the Americans managed some amazing comebacks. Against Brazilian world champion and tall blocker Andre Loyola and partner George Wanderley, they were down 11:14 in the third set and still came out victorious.

“It means they really believed it. If you don’t believe it, you don’t do it. It is the American mentality.”

“When I saw them in Espinho for the first time, I really thought these guys are good. They are fast, strong, they are young and have a very good mindset. They play like veterans in certain moments. In the semifinal tie-break against Mol/Sorum, they came up with those aces in the end and this is something very special. Doing this against the favorites, in the semifinal of the world championships in front of this crowd, it says something about you. On top, they have a great coach and the German structure helps.” 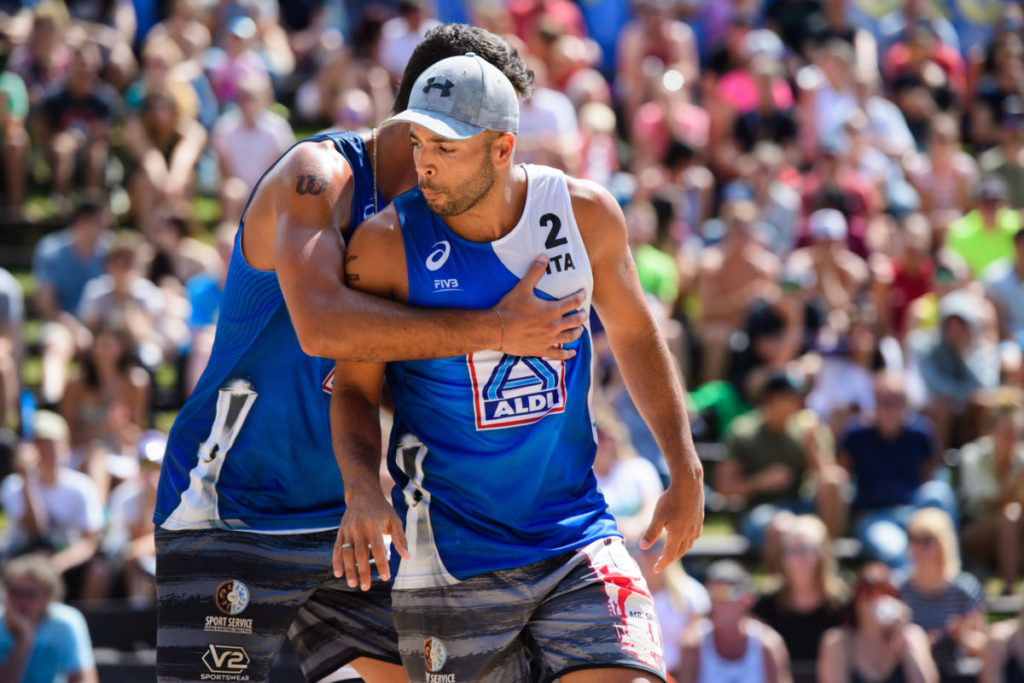 The World Championships are over but the race towards Tokyo 2020 has just begun. This week, Marco and the team will be competing in Gstaad where the season’s first Major Series event takes place.