Norwegian Vikings Anders Mol and Christian Sorum didn’t manage to claim their fourth consecutive World Tour gold after winning the 4-stars at Itapema (Brazil) and Jianjiang (China) and Ostrava (Czech Republic). In Warsaw they lost the gold medal match to Brazilians Evandro and Bruno Schmidt. Against the reigning world and Olympic champion the Norwegian youngsters totally dominated the Brazilians in the first set. Numerous blocks by Anders Mol lead to a quick 21:11 set win. The Brazilians started the second set with several technical errors but managed to fight back and claim the second set. Continuously improving their performance and supported by Evandro’s strong serving they took the lead in the tie-break and finally claimed their first FIVB gold as a team (11:21, 21:17, 15:12). A rather angry Bruno after the gold medal match:

“We wanted to make the tournament as long as possible, we started our team in February and we need to be playing all the time, especially Evandro. We didn’t think about World Championships yet.”

In a spectacular first semifinal thriller Russian top team Krasilnikov/ Stoyanovskiy had challenged the Vikings in a 70-minute three-set battle with a lucky end for the Vikings. After an early lead in the first set, the Russians took a 10:5 lead to force the Norwegians into a timeout. Mol/Sorum recovered to win the extended set 25:23. In the second set they forced the Russians into an early timeout at 5:1. This time Krasilnikov/ Stoyanovskiy recovered to win the set by 21:19. The tie-break was a thriller with the Russians having three match points at 14:11. In total the Vikings defied 8 match points before being able to claim victory and advance to the final (25:23, 19:21, 23:21).

In an all-Russian bronze medal match Krasilnikov/ Stoyanovskiy lost to compatriots Semenov/Leshukov who claimed bronze (21:19, 17:21, 16:14). With in total three teams in the quarterfinals, the Russians showed a very strong performance in Warsaw. The third team Nikita Liamin and youngster Taras Myskiv lost their quarterfinal to Evandro and Bruno only after missing numerous match points in the second set (26:24, 24:26, 7:15).

On the women’s side, Australians Taliqua Clancy and Mariafe Artacho claimed their fifth World Tour gold against American surprise team Stockman/Larsen who had reached the main draw through the qualifiers. After a good start for the US girls, the Aussies had a strong comeback and posted a two-set win (22:20, 21:17). In the semifinals Larsen/Stockman had upset Brazilian World Tour Final winners Agatha/Duda – who claimed bronze – in two straight sets (21:11, 21:19). 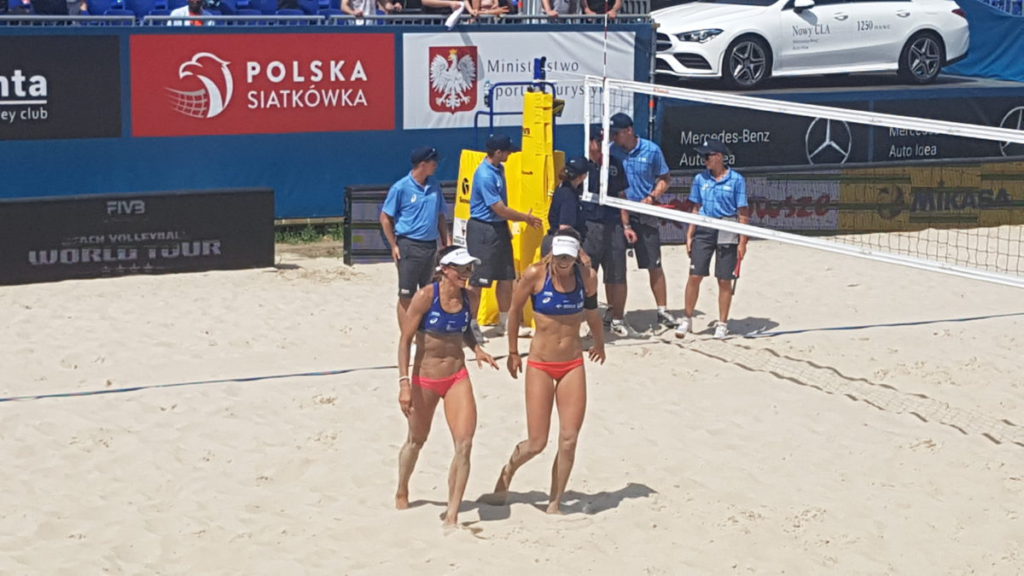 Stockman/Larsen after their semifinal win

The Americans after the gold medal match:

“It was an awesome tournament for us. We learned a lot and we are super grateful for this opportunity.”