Top-seeded Norwegians Anders Mol and Christian Sorum gave the Vienna crowds another demonstration of their strength and claimed their second consecutive Vienna gold medal. In the final the Vikings dominated from the beginning against reigning Olympic champion Alison and his partner Alvaro Filho from Brazil. In the first set Anders Mol performed a block party with five blocks against the Brazilians to claim the set 21:11. The Brazilians stepped up their game in the second and both teams showed several spectacular rallies. Being at full strength again towards the business end of set 2, the young Norwegians finished in style to claim their next gold medal. It is their sixth in the current year after winning in Itapema (Brazil), Jinjiang (China), Ostrava (Czech Republic), Gstaad (Switzerland) and Tokyo (Japan). Anders Mol delighted:

“It’s incredible. We are winning too much recently. It’s so much fun. We love Vienna.”

In the afternoon’s semifinals, the Norwegian youngsters had beaten Polish top team Fijalek/Bryl in a rematch of last year’s final (23:21, 21:12). In the second semifinal, Alison/Alvaro Filho who had taken down Russian world champs Viacheslav Krasilnikov and Oleg Stoyanovskiy in a thrilling quarterfinal, defeated Amercians Dalhausser/ Lucena in two sets (21:18, 21:16). A strong Alison performed a total of 9 blocks against the US team. Dalhausser/Lucena did also lose the bronze medal match against Fijalek/Bryl who claimed the bronze medal (21:17, 17:21, 15:11).

On the women’s side, Hamburg world champions Sarah Pavan and Melissa Humana-Paredes defied three Brazilian teams in the Vienna Major semifinals and claimed gold in the Austrian capital. In the gold medal match that had been postponed to Sunday due to weather conditions, the Canadians beat Maria Antonelli/ Carol from Brazil in straight sets (21:19, 21:16). After the Brazilians took the lead in the first set, the Canadians needed to fight back hard to turn the tables. They managed to tie the score at 19:19 and with two more points while serving, the Canadians claimed the set 21:19. In the second set, the new world champions further stepped up their game after the tech time-out to post another Major victory. 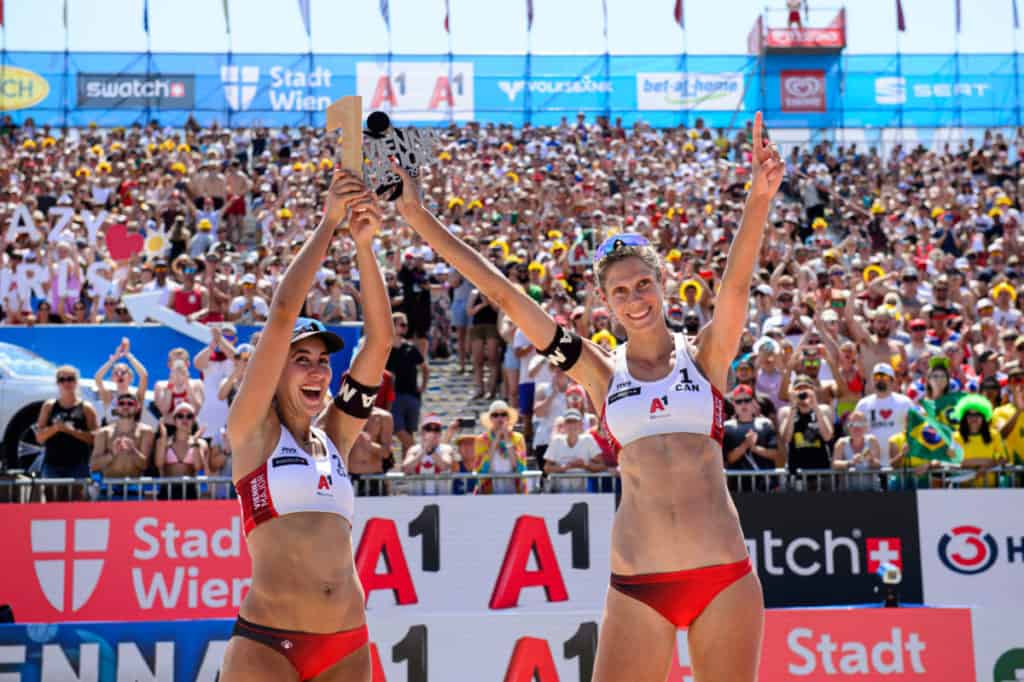 In Saturday’s semifinal, the Canadians had beaten World Tour Finals winners Agatha/Duda decisively (21:17, 21:12) to claim their spot in the gold medal match. Agatha/Duda recovered in the bronze medal match where they beat Brazilian compatriots Talita/Taiana Lima.