Norwegians Anders Mol and Christian Sorum continued their great run in this year’s FIVB World Tour. In the 4-star Tokyo event, they reached their seventh final of the season. Just as a few weeks ago in the Gstaad final, the youngsters made the semifinal look easy against 2013 world champions Brower/Meeuwsen from the Netherlands. The first set started off with strong blocking on both sides. In the later stages of the set Anders Mol took over and closed the set with two huge blocks against Alex Brouwer. The Vikings continued strongly and finished the match in only 35 minutes (21:17, 21:17). Christian Sorum:

“It is great to make another final, especially in Tokyo, only one year before the Olympics.”

In the quarterfinals, the Norwegians had beaten US team Tri Bourne and Trevor Crabb in an intense three-set match (20:22, 21:17, 15:13). In tomorrow’s gold medal match they will go up against surprise team Ehlers/Flüggen. The Germans who came through qualification managed a huge comeback against Brazilians Alison/ Alvaro Filho. Having lost the first set, they were down 13:17 in the second to score six consecutive points and win the set 21:19. In the tie-break the Germans did successfully target Alison to finally advance to the gold medal match (16:21, 21:19, 16:14). With Andre/George, Ehlers/Flüggen had beaten another Brazilian team in the quarterfinals in another tie-break thriller. 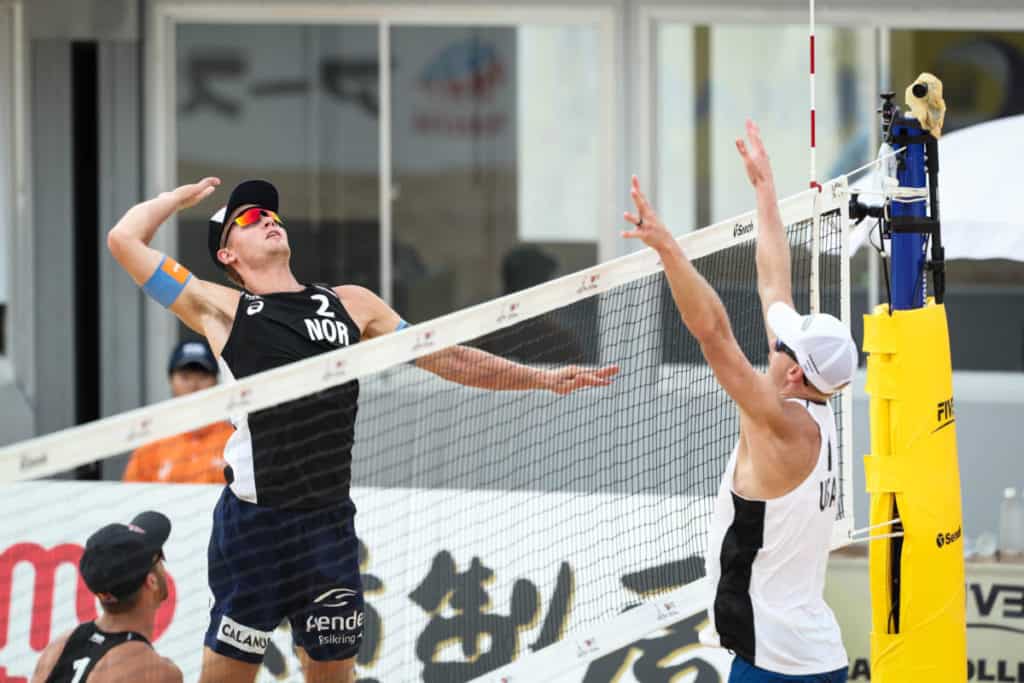 On the women’s side, A-Team April Ross and Alix Klineman posted a close two-set semifinal win against Germans Julia Sude and Karla Borger (23:21, 22:20). In the first set, the Americans needed five set points to close the set. In the second, the US girls targeted Julia Sude but the Germans fought back hard and had set point at 20:19. Klineman/Ross won the next three points to claim the victory and advance to tomorrow’s gold medal match. Alix Klineman after the match:

“This is a huge learning experience to play here at the Olympic site in Tokyo.”

In the quarterfinals earlier on Saturday, Klineman/Ross defeated second-seeded Melissa Humana-Paredes and Sarah Pavan (Canada) against whom the A-Team had lost the World Championships final in Hamburg beginning of the month. In Sunday’s gold medal match, they will now face World Tour Finals winners Agatha/ Duda from Brazil who claimed an easy win against Canadians Heather Bansley and Brandie Wilkerson. Having struggled in pool play, the Brazilians dominated both sets decisively (21:11, 21:12). Agatha after the semifinal:

We are very happy and proud. In the pool, we were third and had to change our mindset to advance. Against the US team it will be very hard but I hope the Japanese cheer for us.”

You can watch all of tomorrow’s medal matches on the official FIVB Youtube channel.