Warsaw silver medalists Kelley Larsen and Emily Stockman are well in shape for the upcoming World Championships in Hamburg (Germany). At the AVP Seattle event the number-two seeds went strong and claimed their first AVP title as a team. After a moment of silence for the late AVP player Eric Zaun, the final was a one-sided match. Larsen/Stockman beat third-seeded Emily Day and Betsi Flint in two sets. Never having lost against Day/Flint before, Larsen/Stockman only struggled in the very beginning. After an early timeout, they came back strong to win in two straight sets (21:17, 21:12). Emily Stockman after her first title win:

“Finally my first title. It was my older sister who brought me to volleyball and my college coach got me interested in beach.”

In absence of top teams Alix Klineman/April Ross and Summer Ross/Sara Hughes, no big surprises occurred until Sunday. In a kind of pre-final Larsen/Stockman beat top-seeded Kelly Claes and Sarah Sponcil in a three-set semifinal thriller. After starting slow in the first set, they recovered to win the second. In the very close tie-break, Larsen/Stockman needed to fight off three match points before advancing to the final (18:21, 21:17, 17:15). In the other semifinal Day/Flint also had to come back after being one set down against fourth-seeded Karissa Cook and Jace Pardon (19:21, 21:19, 15:11). 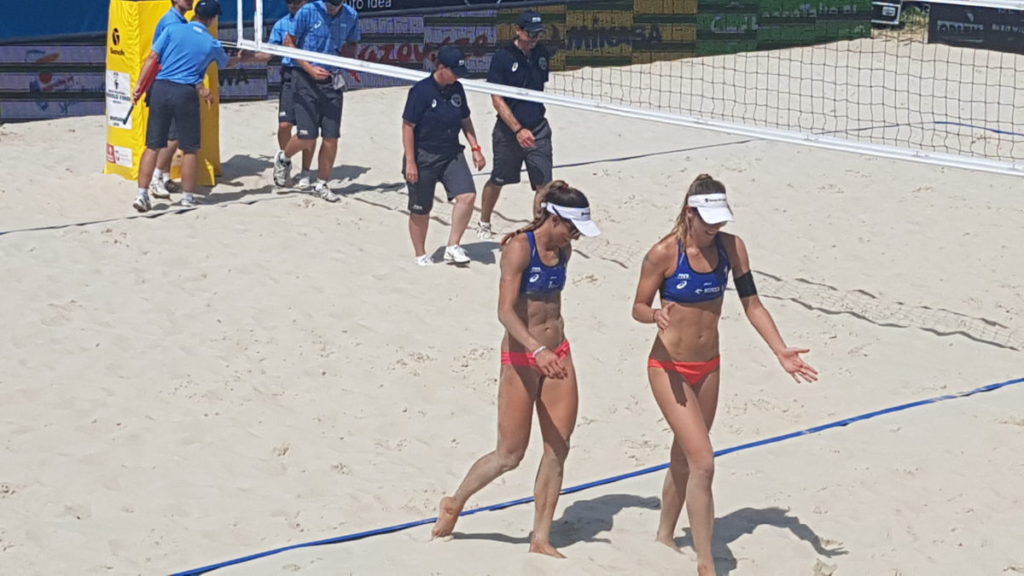 With Lucena/Dalhausser and Bourne/Trevor Crabb preparing for the upcoming World Championships, it was Jeremy Casebeer and Chaim Schalk who took the opportunity to claim their first AVP title. In an emotional final they defeated top-seeds Jake Gibb and Taylor Crabb in two sets (21:19, 21:18). Casebeer/Schalk both showed themselves fired up in the final. Their strong serves put a lot of pressure on Gibb/Crabb who didn’t find an adequate response. Both teams had come straight through the winners bracket with Gibb/Crabb not even dropping a set.

In the semifinal Casebeer/Schalk had beaten Budinger/Patterson in another serving clinic. Going strong from the very beginning and eager to claim their first AVP title, Jeremy “Cacebeer” served incredibly and ensured an early 7:0 lead in the first set. Budinger/Patterson could never fully recover from this setback and lost in two sets (21:13, 21:19). In the second semifinal, Gibb/Crabb had eliminated seventh-seeded Allen/Slick who were the lowest-seeded team to reach final Sunday (21:18, 21:17).