Phil Dalhausser and Nick Lucena claimed their first AVP win in 2019. In the New York City Gold Series final they beat Tim Bomgren and Troy Field in two straight sets (21:14, 21:16). After a quick first set win, Dalhausser/Lucena also showed a consistent performance in the second never leaving any space for their opponents.

While Phil and Nick went all their way through the winners bracket, Bomgren/Field reached their first ever final as a team coming through the contenders bracket. In the semifinal Bomgren/Field had beaten oldies Sean Rosenthal and Ricardo Santos in two sets. A sort of pre-final had been played in the second semi where Dalhausser/Lucena needed a long fight against top-seeded Jake Gibb and Taylor Crabb. It was only after three intense sets that the later champions prevailed (23:25, 21:16, 18:16).

On the women’s side, A-Team Alix Klineman and April Ross dominated again and won their second title in the season after winning Huntington Beach earlier in May. The top-seeds defeated Kelly Claes and Sarah Sponcil in the final in two sets (21:19, 22:20). They had beaten the same team before to send them into the contenders bracket. In the semifinals the A-Team had eliminated Larsen/Stockman while Claes/Sponcil defeated Sara Hughes and Summer Ross. 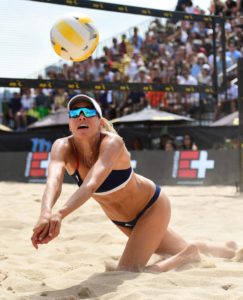 April Ross about Alix Klineman after the final:

“The serving was really a game changer. She is one of the best servers in the world and the last one was really crucial.”