Norwegian Vikings Anders Mol and Christian Sorum seem to be repeating last season’s winning run and claimed their second gold within a week. After being victorious at Itapema, the youngsters also posted a win in the Jinjiang gold medal match against reigning world champion Evandro and reigning Olympic champion Bruno from Brazil. In the first encounter of both teams the Norwegians prevailed in a spectacular three-set match. In the beginning, the Vikings were struggling with Evandro’s serve which led to an early 6:1 lead for the Brazilians. The Brazilians could keep this advantage and won the first set. In the later stages Mol/Sorum managed to pass Evandro’s serve and came up with some spectacular points when siding out. The following sets were great beach volleyball with the better end for the Norwegians (14:21, 21:17, 15:12). Anders Mol:

“It has been an intense week. We were jetlagged after Itapema. It feels amazing to have this gold medal. We had a good start this season and want to maintain our good form.”

In the previous rounds the Vikings had eliminated three US top teams. After defeating Hyden/Doherty in the round of 16, they beat Dalhausser/Lucena in a close three-set match (21:18, 18:21, 16:14). In the semifinals they posted another win against Tri Bourne and Trevor Crabb who have never beaten the Vikings so far (21:15, 21:15). Bourne/Crabb also lost the bronze medal match against Brazilians Andre/George.

On the women’s side, three-time Olympic champion Kerri Walsh Jennings and Brooke Sweat (USA) claimed gold against the world elite at Jinjiang. In the gold medal match they showed a flawless performance against Autralian top team Taliqua Clancy and Mariafe Artacho. The Americans won in two straight sets (21:17, 21:19).

Before Kerri Walsh Jennings and Brooke Sweat had beaten World Tour Finals winners Agatha/Duda from Brazil in a very close three-set semifinal. The Americans showed a strong performance and at the same time the Brazilians came up with too many service errors. Not surprisingly, Duda finished the third set with another missed serve. In the round of 16, Sweat/Walsh Jennings had eliminated reigning Olympic champion Laura Ludwig from Germany and her new partner Margareta Kozuch before defeating compatriots Kelly Claes/Sarah Sponcil in the quarterfinals. Kerri Walsh after the final:

“The world is so good in volleyball, the Aussies are very physical. But we are getting better and better and it feels good.” 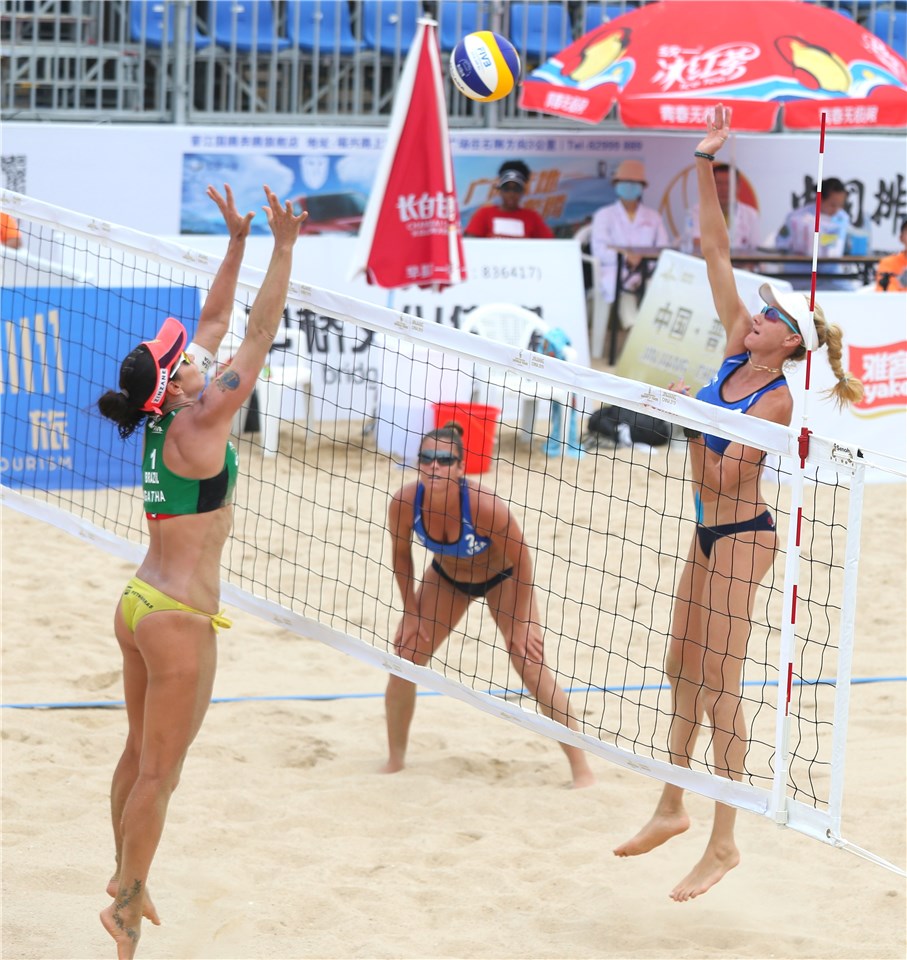 Kerri Walsh and Brooke Sweat in the semifinal against Agatha

In the second semifinal, Clancy/Artacho had defeated Xiamen and The Hague winners Ana Patricia/Rebecca (Brazil). The Brazilian newcomers who were one out of four Brazilian teams in the quarterfinals, weren’t able to fully focus on their semifinal match. In the second set they started with an 11:3 lead but still managed to lose the set by 14:21. Ana Patricia/Rebecca could recover from their semifinal loss and at least claimed bronze against Agatha/Duda.