There will be at least one US team in the women’s final four of the World Championships in Hamburg. Sarah Hughes and Summer Ross who had beaten home favorites Laura Ludwig and Maggie Kozuch yesterday, knocked out strong Dutch team Stubbe/ van Iersel in two sets (21:14, 21:19). The Amercians showed again a very consistent performance to reach the quarterfinals. There they will go up against their compatriots Alix Klineman and April Ross. The A-Team didn’t have any trouble to defeat Latvian surprise team Graudina/Kravcenoka (21:11, 21:18). The Latvians with blocker Tina Graudina from University of California (USC) fought hard but couldn’t stop the Americans. 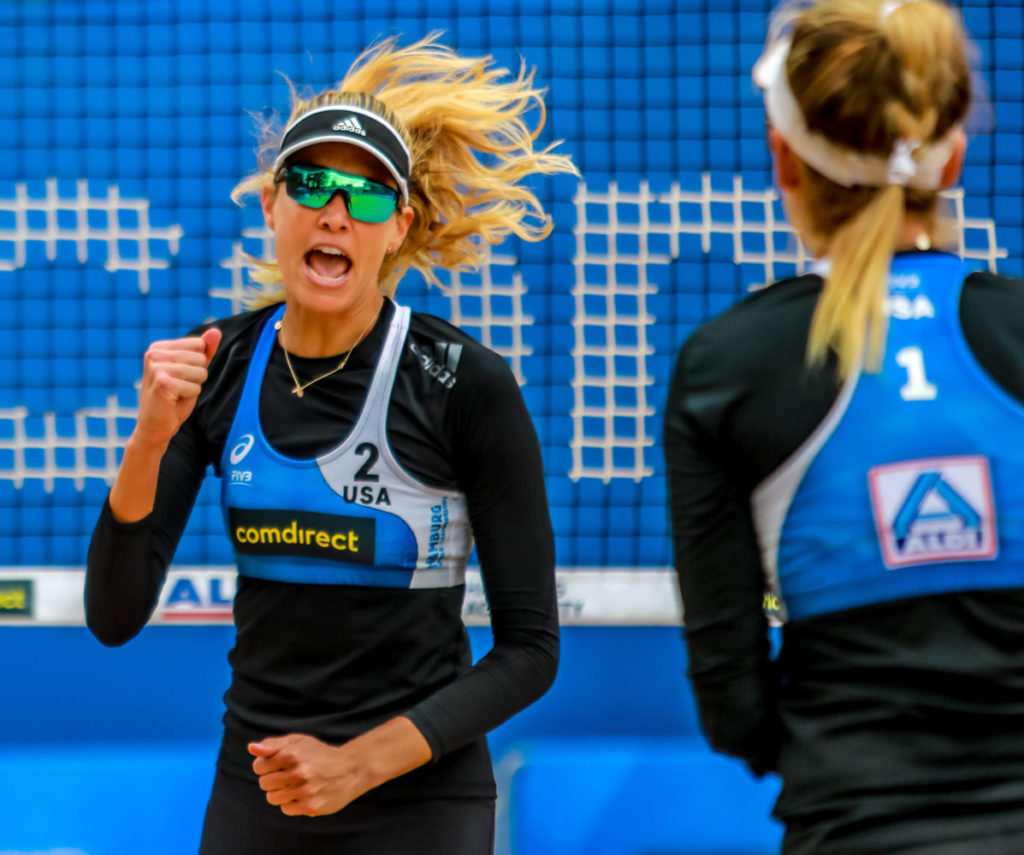 Sarah Sponcil and Kelly Claes couldn’t repeat their huge turnaround from the day before to claim a spot in the quarterfinals. Against Italians Menegatti/ Orsi Toth the Amercians lost in two sets (24:26, 16:21).

On the men’s side, Billy Allen and Stafford Slick upset reigning Olympic champion Bruno and reigning world champion Evandro. In two very close sets the American prevailed in style (21:19, 21:18). The US late bloomers at age 37 and 34 showed a dominant service game and were all smiles after beating the Brazilians on Independence Day:

“It’s always special to compete for USA over my heart, but today it means a little bit more.”

In the late afternoon both Crabb brothers managed to advance to the round of 16. Taylor Crabb and Jake Gibb defeated Spaniards Herrera/ Gavira in two straight sets (21:16, 21:17). Then his brother Trevor Crabb and partner Tri Bourne from Hawaii turned around a match that had already been lost. Crabb/Bourne were down one set and also struggled in the second. But the Americans found their strength again and fought back. Against their German opponents and the massive German support on center court, Crabb/Bourne forced a tie-break that they finally won decisively (15:21, 21:19, 15:10). Tri Bourne:

“We were just playing our game. It was mental toughness. This is the kind of crowd I had been dreaming of.”

Having struggled all over pool play and having gone through an additional “lucky losers” round, Phil Dalhausser and Nick Lucena stepped up their game today. On center court they defeated Qataris Cherif/Ahmed decisively. Dominating from the very beginning, the US oldies posted a straight two set win (21:18, 21:15). They are the fourth US men’s team competing in the round of 16.

Tomorrow, the men’s round of 16 will see a battle in three episodes between the USA and Russia. Three US duos will have encounters with Russian teams that showed a strong performance so far. At 1.45pm Gibb/Crabb will play Russian top team Krasilnikov/Stoyanovskiy. At 3pm Bourne/Crabb will face Semenov/Leshukov who eliminated Kantor/Losiak from Poland. And at 6pm Dalhausser/Lucena will go up against 2017 bronze medalist Nikita Liamin and his new partner Taras Myskiv who knocked out Vienna silver medalists Doppler/Horst from Austria. Slick/Allen will play Italians Lupo/Nicolai. Find the full elimination schedule here.