It is the final weekend of the World Championships and in the women’s gold medal match A-Team Alix Klineman and  April Ross is going for gold against Canadians Sarah Pavan and Melissa Humana-Paredes. After beating compatriots Sarah Hughes and Summer Ross in the quarterfinals (21:18, 21:14), Klineman/Ross showed another superb performance against Australian top team Mariafe Artacho and Taliqua Clancy (21:15, 21:18). With strong serves the Americans put a lot of pressure on the Aussies who didn’t find their game. In the first North American final ever, the A-Team will face Sarah Pavan and Melissa Humana-Paredes who had to defy a match point in their semifinal three-set thriller against Nina Betschart and Tanja Hüberli from Switzerland. For April Ross it will be her third world championships final after winning gold in 2009 and silver two years ago in Vienna:

“Alex served so tough, she was such a big presence at the net. If we can play the same on Saturday, with the same attitude, intensity and aggression we have a great shot. We just wanna keep it rolling.”

In the men’s quarterfinals, two US teams will fight for a spot in the semifinals. Tri Bourne and Trevor Crabb who beat Russians Semenov/Leshukov in two straight sets will face Brazilian world champion Andre and his partner George Wanderley.

US oldies Phil Dalhausser and Nick Lucena also beat Russia in two sets and will go up against home favorites Julius Thole and Clemens Wickler who performed another incredible show in front of a packed center court. Against reigning Olympic champion Alison and his partner Alvaro Filho, the German youngsters played again with strong confidence. Just as against Dutch world champions Brouwer/Meeuwsen, Julius Thole produced another blocking hattrick in the first set. With three consecutive successful blocks against Alvaro Filho, the German took a 17:10 lead which secured a quick first set win. With a strong Clemens Wickler in the backcourt, the Germans made it look easy and also claimed the second set in convincing fashion (21:14, 21:15.) 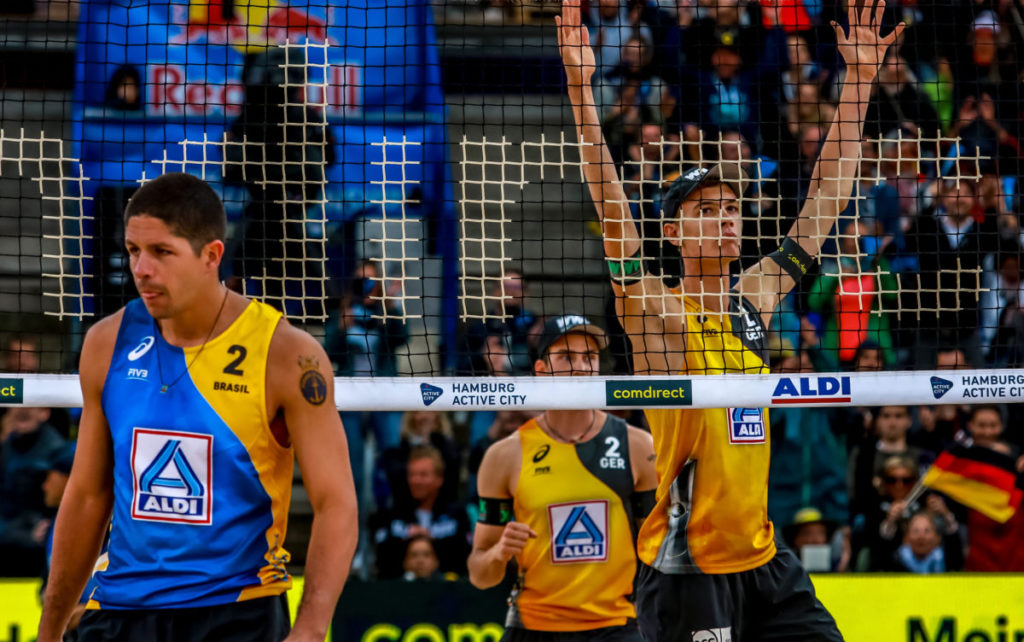 In another quarterfinal match, Russian top team Krasilnikov/ Stoyanovskiy will play Italians Rossi/Carambula. With their consistent and efficient play, the Russians knocked out Americans Jake Gibb and Taylor Crabb. Though playing a good match, the US team didn’t find any means against the Russians who came up with an incredible side-out ratio of nearly 90%.

The fourth quarterfinal will see Norwegian Vikings Mol/Sorum going up against Italians Nicolai/ Lupo. The Italians advanced after an intense three-set thriller against US boys Billy Allen and Stafford Slick (27:25, 18:21, 15:13). Find the full elimination schedule here.