The first day of the women’s elimination phase at the World Championships in Hamburg started with a close victory of European champions Sanne Keizer/ Madelein Meppelink (Netherlands) against US girls Emily Stockman and Kelley Larsen. In a close three-set match the Dutch started strongly and won the first set. The American AVP Seattle winners could recover from the early setback and claimed the second set (21:13). In the tie-break the score was all tied at 12:12 before some strong blocking earned the Dutch two match points that they finally converted (15:13). In the round of 16, the European champions will play against Canadians Sarah Pavan/ Melissa Humana-Paredes who beat Wang/Xia from China in two straight sets.

In the match between the highest-seeded teams in the round of 32, beach volleyball “gypsy” Brandie Wilkerson and Heather Bansley (Canada) went up against Australian top team Mariafe Artacho and Taliqua Clancy. The Canadians who had been struggling all over pool play did again not manage to find their game. The Aussies dominated both sets, winning the first by 21:15. After a 3:0 lead for the Canadians in the second, Artacho/Clancy did again step up their game and started a points run that ended in four match points at 20:16. Brandie Wilkerson’s strong blocks could reduce the gap to 20:19 but in the end the Australians prevailed. 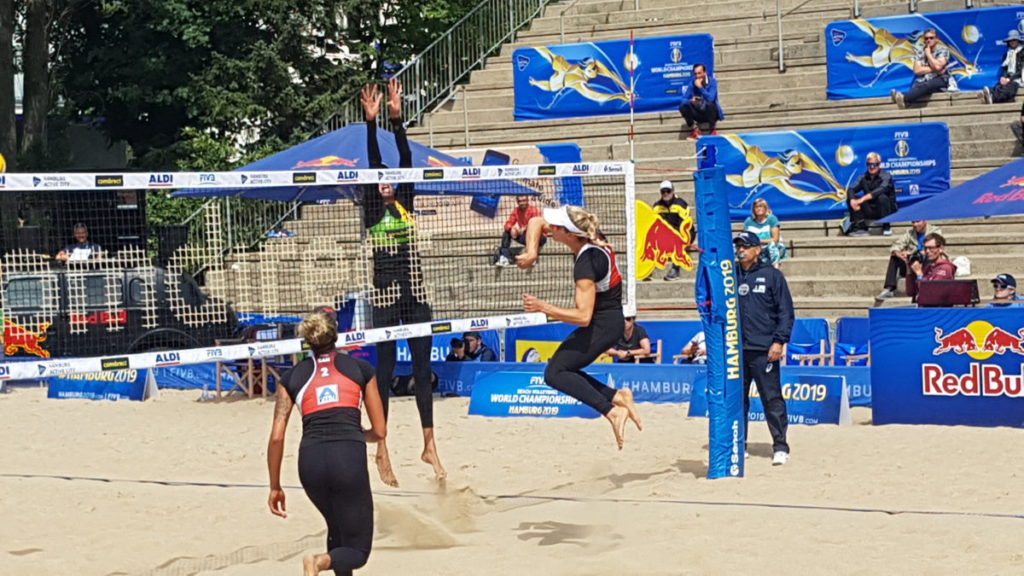 Heather Bansley against Taliqua Clancy at the net

A huge turnaround managed Sarah Sponcil and Kelly Claes against German team Sandra Ittlinger/ Chantal Laboureur. In front of the local crowds on Hamburg Rothenbaum center court, the Americans were one set down and at 14:18 in the second set. With a four point run the US girls tied the score at 18:18 and 19:19. Two successful attacks by Kelly Claes forced the tie-break which the Americans won decisively (19:21, 21:19, 15:10). Kelly Claes on the team effort between USC and UCLA: 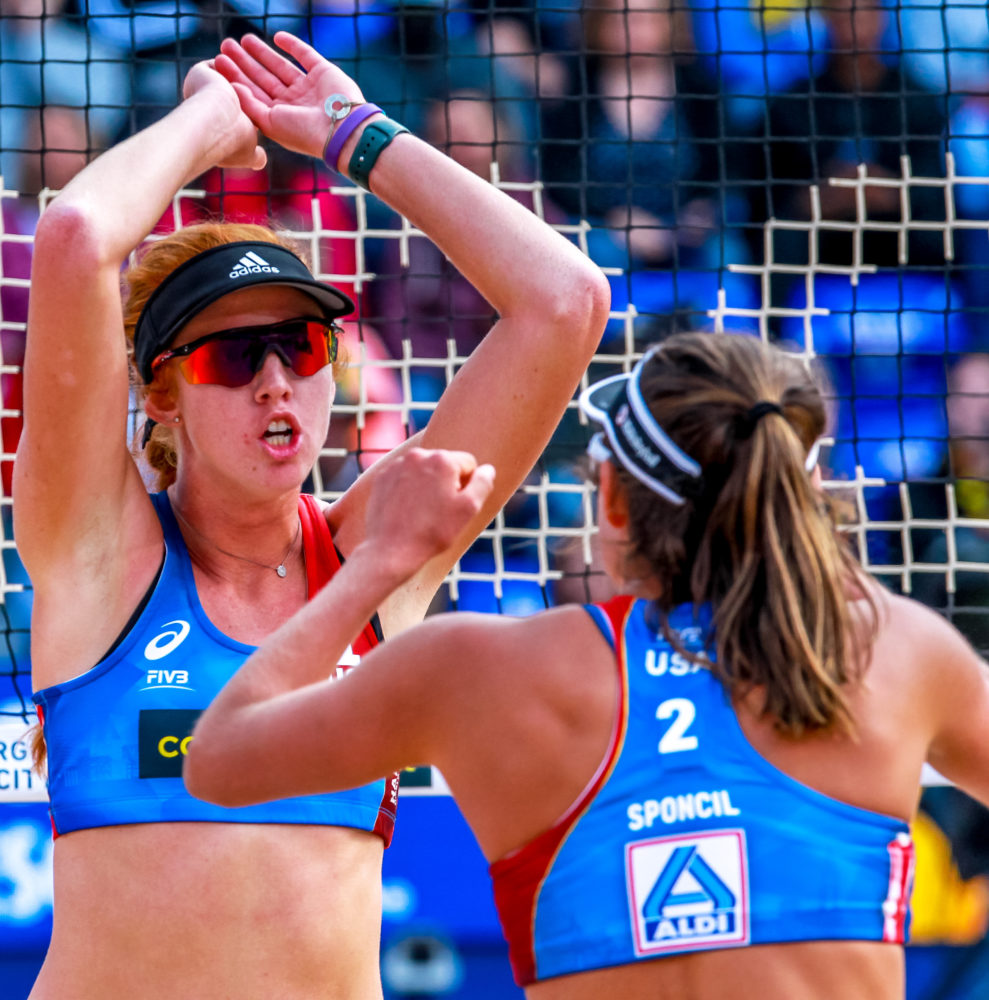 “The crowd was against us which is fine. The Germans are an amazing team. I felt I turned the switch on and thought this is not where it ends. But I couldn’ have done it without my partner.”

The afternoon continued to go well for the US girls. In the match against home favorites Laura Ludwig and Maggie Kozuch, Sara Hughes and Summer Ross claimed a fantastic victory. Taking early leads in both sets, the Americans dominated completely and won in straight sets (21:15, 21:12). With Maggie Kozuch obviously having some respirational problems and taking a medical time out in the second set, the Germans did never find their game. Laura Ludwig:

“I think we were somewhat too satisfied after pool play. Today we never managed to play our game.” 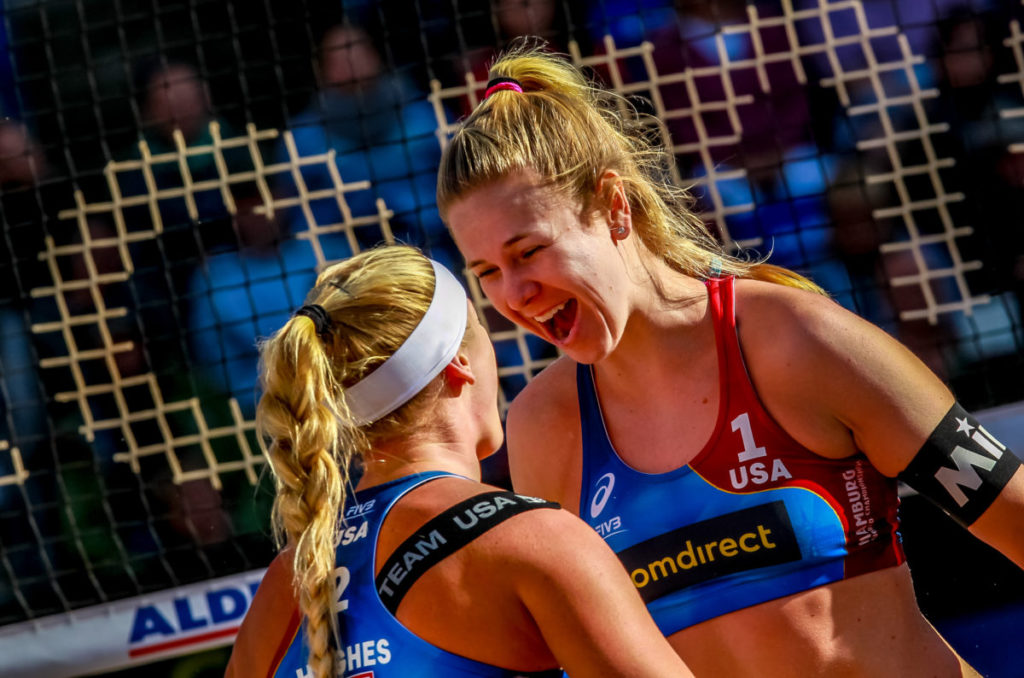 With A-Team Klineman/Ross beating Brazilians Carol/Maria Antonelli in three sets and Kerri Walsh losing to Brazilian top team Agatha/ Duda in two straight sets, three US women’s teams advanced to the round of 16 that is going to be played tomorrow. Sponcil/Claes will play Italians Menegatti/ Orsi Toth, Hughes/Sumer go up against strong Dutch team Stubbe/van Iersel and the A-Team will face Latvian surprise team Tina Graudina and Anastasija Kravcenoka.

On the men’s side, the elimination matches have been defined. In their very last chance to make it into the round of 32, Phil Dalhausser and Nick Lucena who ended up third in their pool beat Mexicans Ontiveros/ Virgen in two sets (21:15, 21:17). They will play Qataris Ahmed/Cherif on center court on Thursday at 6pm local time. The remaining US men’s teams will face strong opposition in the round of 32. Billy Allen and Stafford Slick will play current and former world champions Evandro and Bruno Schmidt from Brazil. Gibb/Crabb go up against Spaniards Herrera/ Gavira and Hawaiians Trevor Crabb/ Tri Bourne will face Germans Ehlers/Flüggen who surprisingly topped Pool J. Find the full elimination schedule here.