Ludwig/Kozuch top their pool – US men’s treams in trouble

Day 5 was the final day of women’s pool play. Home crowd’s favorites Laura Ludwig and Maggie Kozuch managed to top their pool although they had been beaten by Brazil two days ago. But since Maria Antonelli and Carol Salgado lost their third match to AVP Seattle winners and Warsaw silver medalists Kelley Larsen and Emily Stockman, the Germans finished first in the pool due to set ratio. Carol/ Maria Antonelli are actually the first Brazilian team including men and women losing a match in the 2019 World Championships.

The other American women’s teams in action ended up second in their pools after Sarah Sponcil/ Kelly Claes lost to Canadians Sarah Pavan/ Melissa Humana-Paredes in a three-set thriller and Sara Hughes/ Summer Ross were defeated by Russians Makroguzova/ Kholomina in two sets. Since no US women’s team was able to top their pool, they will face some tough opponents in the round of 32. See the full elimination round schedule here.

More trouble came up for the Americans in the afternoon when the US men’s teams finished pool play. Except for Billy Allen and Stafford Slick who beat Qatar and finished second in their pool, all US teams lost their third match in pool play.

US oldies Phil Dalhausser and Nick Lucena did escape total elimination only due to their points ratio. Never being able to play consistently, they lost to 2013 world champions Brouwer/Meeuwsen from the Netherlands in two sets. Having lost to Canada’s Ben Saxton and Grant O’Gorman before, they ended up third in their pool with same set but better points ratio than fourth-ranked Argentina. Being real “lucky losers”, they need to wait until tomorrow to know their opponent for an additional “lucky loser” match to reach the round of 32. 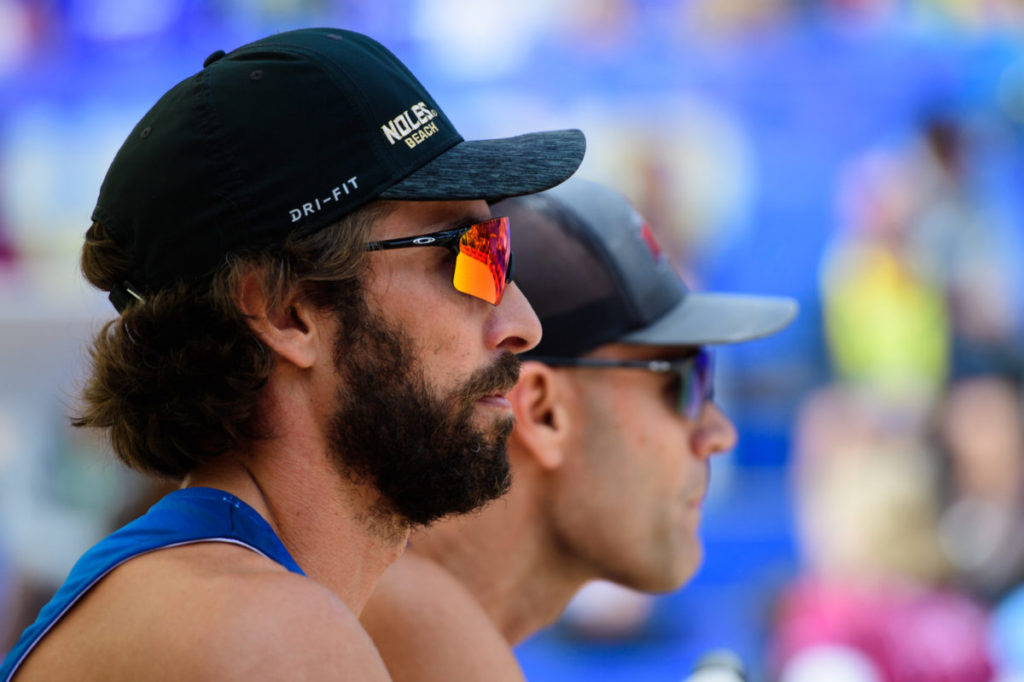 Jake Gibb and Taylor Grabb were defeated by Polish “hurry up” volleyball team Piotr Kantor and Bartosz Losiak in the match for the top of Pool G. Being beaten 17:21 & 19:21, Gibb/Crabb finished second in their pool. Same is true for Taylor’s brother Trevor and Tri Bourne who also lost the final pool match to German’s top team Thole/Wickler finishing second in the pool. After losing the first set, the Hawaiians recovered in the second and took a 12:8 lead. But with two consecutive time outs, the Germans regathered their forces and finally won in two sets (21:16, 21:17). With all US men’s teams finishing second or third, numerous encounters with top teams can be expected in the round of 32 which will be drawn tomorrow afternoon.

In their third match on center court, Norwegian beach volleyball Vikings Anders Mol and Christian Sorum continued their successful run through pool play. Making it look easy, they beat Brazilians Pedro Solberg and Vitor Felipe in two straight sets (21:14, 21:15). Without being really challenged and not dropping a single set so far, the Norwegian youngsters will advance as top-seeded team to the elimination round. Anders Mol on his 22nd birthday:

“It’s a perfect day. I can’t imagine a better day to celebrate my birthday. There will be a lot of tough games coming up and no matter whom we meet, we want to beat them.”