They had never medaled before as a team on the FIVB World Tour. But today was the day for Americans Jake Gibb and Taylor Crabb. In the final of the FIVB 4-star event at Chetumal (Mexico), the AVP champions beat Dutch top-seeds Alexander Brouwer and Robert Meeuwsen in three sets. After each of the teams had won one set, the Americans stepped up their game in the tie-break. Strong blocks from Jake Gibb and too many missed serves from the Dutch brought the first ever FIVB medal for the US team that had claimed a fourth place at the Rome World Tour Finals this September. Taylor Crabb after winning his first FIVB medal:

“We battled so hard for the last three years. It is very special for us. I wouldn’t ask for any other partner than Jake to do this.”

Just before the final, Taylor’s brother Trevor and Tri Bourne claimed the bronze medal against Germany. In the semifinals, Gibb/Crabb had beaten Germany’s Winter/ Walkenhorst in straight sets. At 18:18 in the first set, Gibb produced a rarely seen double “block hattrick”: three consecutive blocks in one rally and two more in the next two rallies decided the first set and the following one-sided second set. Thanking the local Mexican crowds in Spanish, monster blocker Jake Gibb delighted the stadium. At age 43, he is now the oldest player to ever win an FIVB gold medal.

On the women’s side, the margaritas worked perfectly for Taliqua Clancy. The Australian blocker and her partner Mariafe Artacho claimed their sixth World Tour gold medal against China’s Wang/X.Y. Xia. Being asked after the semifinal how she would prepare for the final, Clancy responded by mentioning the Mexican cocktail as her way to get ready for the final. 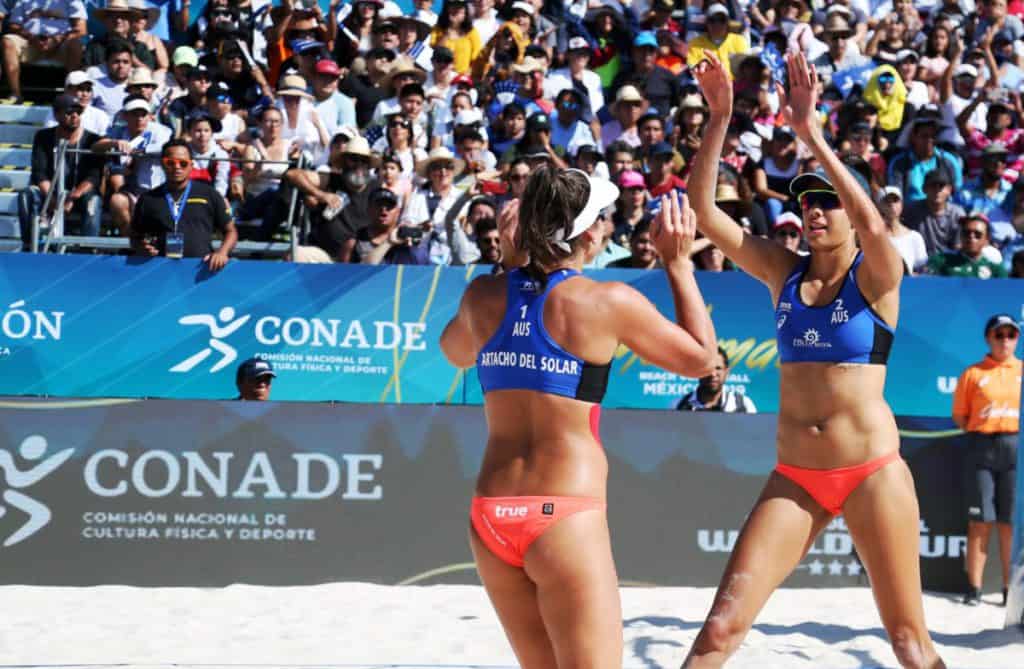 In the gold medal match, the Australian top-seeds produced another huge comeback after starting slow and losing the first set just as they did in the quarterfinals and semifinals. Once again they posted an easy second set win and fought another battle in the tie-break (15:21, 21:14, 15:12). Mariafe Artacho after the final:

“It feels amazing to win the last event of the season. Now we’re off to holidays.”