The 2019 CEV Beach Volleyball European Championship in Moscow (Russia) came to a full start today with the kick-off of the elimination rounds. A major upset occurred in the men’s round of 16 where local heroes and new world champions Viacheslav Krasilnikov and Oleg Stoyanovskiy were knocked out in their first round of elimination play. Having topped their pool, the Russians lost to Austria’s number-23 seeds Ermacora/Pristauz in straight sets (13:21, 19:21). In the quarterfinals, the Austrian surprise team will play Perusic/Schweiner (Czech Republic) who defeated Italians Rossi/Carambula.

Straight two-set wins posted top-seeded Norwegians Mol/Sorum against Swiss team Heidrich/Gerson (21:14, 26:24) and German youngsters Thole/Wickler against Austria’s Doppler/Horst (21:12, 21:15). In a rematch of the world championships’s semifinal, the Hamburg bronze and silver medalists will go up against each other in tomorrow’s quarterfinals. Another quarterfinal match will see Dutchmen Brouwer/Meeuwsen face Kantor/Losiak from Poland. While Kantor/Losiak defeated Russians Liamin/Myskiv, the Dutch won their match against the second Polish top team Fijalek/Bryl due to injury. The only home team to make it into the quarterfinals are Semenov/Leshukov who won their match against Varenhorst/van de Velde (Netherlands). The Russians will go up against Olympic silver medalists Nicolai/Lupo from Italy who knocked out Spaniards Herrera/Gavira.

On the women’s side, Dutch girls Joy Stubbe and Marleen van Iersel advanced to the quarterfinals after beating two German teams. In pool play, Stubbe/Van Iersel had already beaten Borger/Sude in three sets to top their pool and advance to the round of 16. There they defeated Olympic champion Laura Ludwig and her partner Maggie Kozuch (21:18, 21:19) to secure a spot in tonight’s quarterfinal against Polish team Wojtasik/Kociolek. 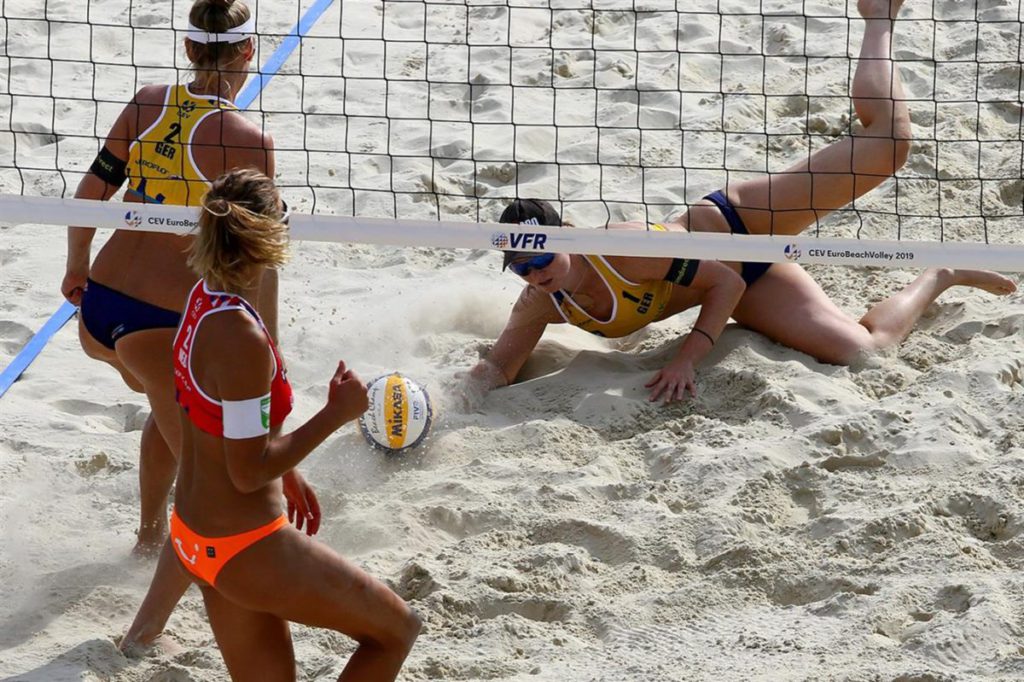 In the quarterfinals, teams from eight different nations competed for spots in the semifinals. In a one-hour three-setter, Liliana/Elsa from Spain knocked out Italians Menegatti/Orsi Toth (22:20, 25:27, 15:11). The win secured them a spot in tomorrow’s semifinal against Latvian young guns Tina Graudina and Anastasija Kravcenoka who defeated Germany’s Itllinger/Laboureur in three sets.