The new European champions are the old ones. In a one-sided EuroBeachVolley 2019 final in Moscow, Norwegian Vikings Anders Mol and Christian Sorum beat home team Semenov/Leshukov in straight sets (21:12, 21:18) to claim their second European championship title after 2018. A consistent side-out play and strong blocking by Anders Mol secured another major win for the Norwegians who have dominated the whole season except for the Hamburg World Championships where they won bronze.

A tougher match for Mol/Sorum than the final was the semifinal, where they posted a somewhat lucky and bitter-sweet victory against Polish “hurry-up” beach volleyball team Piotr Kantor and Bartosz Losiak. The Poles had won the first set and lead 16:15 in the second when Piotr Kantor had to call for a medical time-out due to an ankle injury. In the remainder of the match after the time-out, the Polish team was somewhat handicapped and lost concentration which helped the Norwegians to advance to the final (22:24, 21:17, 15:9). Kantor/Losiak were also not able to play the bronze medal match against Ermacora/Pristauz. This secured bronze for the Austrian surprise team who had eliminated Russian world champions Viacheslav Krasilnikov and Oleg Stoyanovskiy in the round of 16. 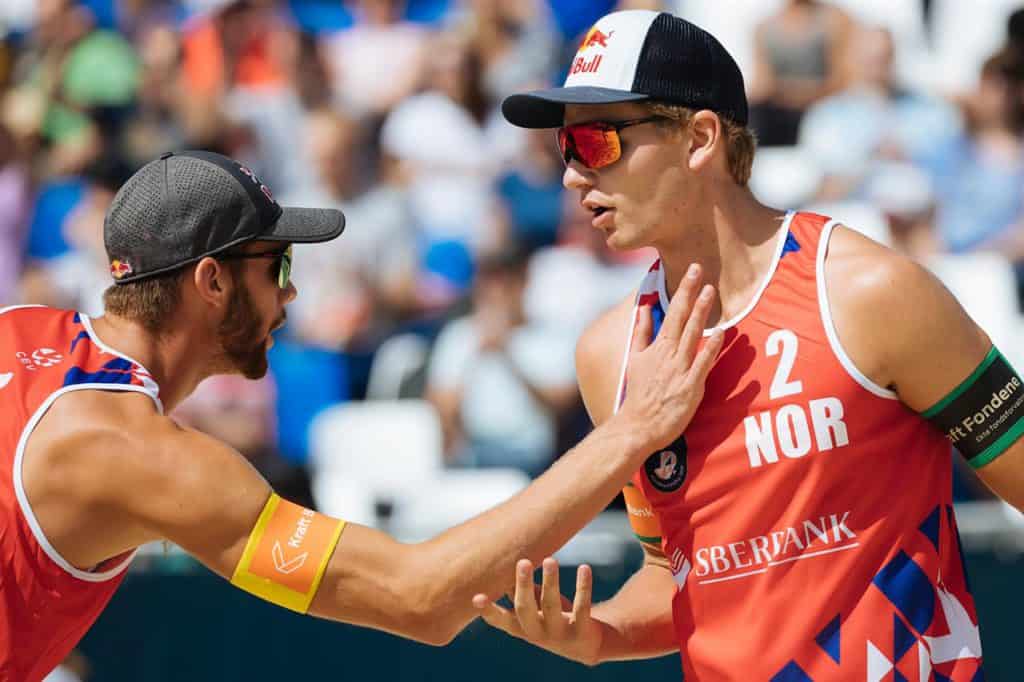 In the women’s competition, Latvian young guns Tina Graudina and Anastasija Kravcenoka won the biggest title of their young careers. Beating Polish team Wojtasik/Kociolek in the final (22:20, 21:19), the Latvians claimed the European Championship title at an age of 21 and 22 respectively. Tina Graudina couldn’t believe it after the match:

“At this moment we are still tired from a very hard day but tomorrow it will hit us and we will realize what we have done. I haven’t processed it yet.”

The Latvian youngsters have continuously improved their game over the last years and already posted some major wins at the Hamburg World Championships in July. Winning their first three matches and topping their pool, Tina and Anastasija also won in the elimination round and made it into the round of 16. Only the later silver medalists, American “A-Team” April Ross and Alix Klineman, could stop the youngsters’ run.

Tina Graudina has been studying at University of Southern California (USC) in Los Angeles, where she was the top player in the women’s famous beach volleyball team. At USC, Tina has also been working with Olympic champion Dain Blanton who has recently been announced as new head coach of USC beach volleyball. Dain has been working with Tina as USC Trojan assistant coach.

Tina and her long-time partner Anastasija Kravcenoka already won the Under-22 European title back in 2016. Anastasija who was obviously already quite confident in the weeks prior to the tournament:

“Before coming to Moscow, I told my family our goal was to play in the final.”

The newly crowned European champions will also play in the upcoming FIVB 4-star Moscow and the World Tour Finals in Rome.