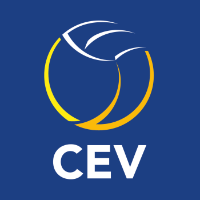 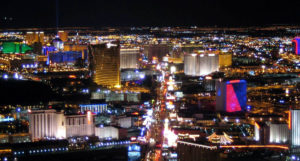 The FIVB 4-star, double gender World Tour event in Las Vegas is hosted by p1440, Kerri Walsh Jennings’ event series. It is the first time that Las Vegas hosts an international beach volleyball event. Being part of the Olympic qualifiying process it will give athletes the chance to accumulate Olympic ranking points for the Tokyo 2020 Summer Games. Total prize purse is US$300,000, each winner team receives US$20,000.

The qualifiers will take place on October 17 and the 32-team main draw on October 18. Both the men’s and women’s finals will be held on Sunday, October 21. Being hosted by p1440, the event will also feature live music performances, high-intensity interval workouts, volleyball trainings, daily yoga sessions and live cooking demos.

For all event information on schedule and results, check out the official FIVB event page. 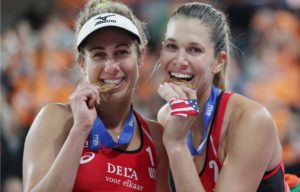 It is for the 9th time that the FIVB World Tour stops at The Hague, Netherlands. It is the first FIVB event in 2019 and just as last year, it is a 4-star indoor tournament. In 2018, Plavins/Tocs (Latvia) won the title but won’t be competing this year. In the women’s competition, Klineman/Ross (USA) are trying to defend their 2018 title when they defated Carolina Solberg and Maria Antonelli from Brazil in the final.
Main draw will take place from January 3rd on the women’s side and from January 4th for the men. The finals in both competitions will be played on January 6th.
Check out the complete event schedule here. 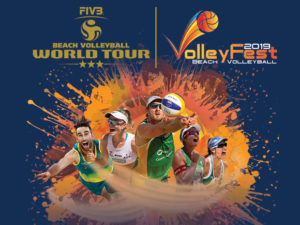 It is for the third-straight season that the FIVB World Tour returns to Manly Beach in Sydney. But it for the first time that Australia hosts a 3-star World Tour. From March 6-10 the $150,000 event will take place at beautiful Manly Beach.  After the qualifiers on Wednesday, pool play will start on Thursday leading to the medal matches on Sunday.

Check out the schedule and results here. Or watch the livestream here. 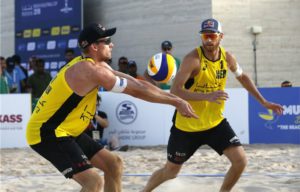 The FIVB 4-star event at Doha will take place from March 12-16 at the Katara Cultural Village to the north of Qatar’s capital. Defending champions are Alexander Brouwer and Robert Meeuwsen from the Netherlands.

The $150,000 event is a men’s only competition that begins Tuesday with qualifying. Pool play will start on  Wednesday setting the stage for the quarter- and semi-finals on Friday and the finals on Saturday. The winning team will receive a prize purse of $20,000. It is for the fifth time that Qatar hosts an international beach volleyball tournament. 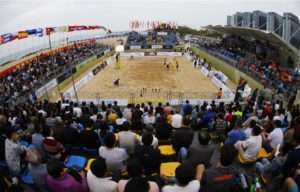 It is for the seventh-straight season that the World Tour returns to Xiamen, China. The US$300,000 Xiamen Open will be gathering the beach world elite in southeast China. After country-quota and qualification matches, main draw starts on April 25. Quarterfinals will be played on April 27 and medal matches are scheduled for April 28. Semifinals and medal matches will streamed on the FIVB Youtube channel.

The FIVB Xiamen 4-Star event is the first women’s tournament since The Hague beginning of January. Barbara Hermannova and Marketa Slukova are the top-seeds after winning silver at last year’s Hamburg World Tour Finals and gold at the Vienna Major in early August. The Czech duo had also won the the Ostrava 4-star event in front of their home crowd.

In the men’s competiton last season’s newcomers Anders Mol and Christian Sorum are seeded first. The Norwegians took the beach volleyball world by storm in 2018. After winning the Majors in Gstaad and Vienna as well as the the European Championships, the Vikings also won the Hamburg World Tour Finals.

Michal Bryl and Grzegorz Fijalek (Poland) and Aleksandrs “Lion King” Samoilovs and Janis Smedins (Latvia) are seeded second and third. Doha surprise winners Esteban and Marco Grimalt from Chile will be seeded 11th. Their opponents in the Doha final, Nick Lucena and Phil Dalhausser, are also amongst the participants and will try to make up for the gold medal match loss. There will be a new champion on the men’s side since 2018 winners Oleg Stoyanovskiy and Igor Velichko have teamed up with new partners.

Check out all participating teams on the official event page. 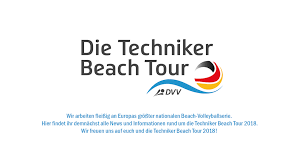 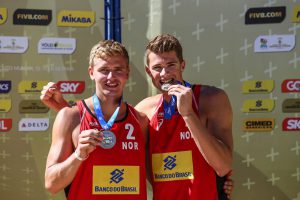 After last year’s successful event, the FIVB World Tour returns to Itapema (Brazil). The $300,000 Itapema Open main draw starts on Thursday followed by elimination rounds on Friday and Saturday and the the medal matches on Sunday.

Last year the Brazilian hosts dominated the event and claimed both gold medals. Defending champions on the men’s side are Evandro Goncalves/Andre Loyola who beat Norwegian youngsters Anders Mol/Christian Sørum in the final. This year Evandro will play with reigning Olympic champion Bruno Oscar Schmidt while his former partner Andre has teamed up with George Wanderley. Besides the Norwegian Vikings, other international top teams competing this week are Poland’s Grzegorz Fijalek/Michal Bryl as well as Piotr Kantor/Bartosz Losiak, Netherlands’ Alexander Brouwer/Robert Meeuwsen and Latvia’s Aleksandrs “Lion King” Samoilovs/Janis Smedins.

You can check out schedule and results at the official event page. 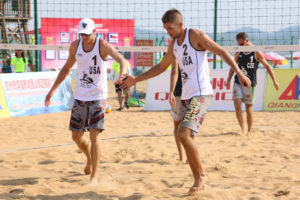 The $300,000 Jinjiang Open start with qualifiers on Wednesday followed by main draw pool play on Thursday and elimination rounds from Friday. The medal matches will take place on Sunday and will be streamed at the FIVB Youtube Channel.

World ranking leaders and Itapema winners Mol/Sorum are top-seeded at Jinjiang. Last year’s champion Trevor Crabb who won alongside John Mayer is now playing with Tri Bourne. Together they already won at Qinzhou and reached the quarterfinals at Itapema. Further US teams competing are NickLucena and Phil Dalhausser as well as John Hyden and Ryan “Avatar” Doherty. Brazil’s Alison Cerutti and Alvaro Filho who won gold at the Kuala Lumpur 3-Star will need to go through qualification.

Agatha Bednarczuk and Duda will lead a strong Brazilian women’s team. They will be joined by Ana Patricia and Rebecca who won at The Hague and Xiamen. Top seeds are Czech team Barbara Hermannova and Marketa Slukova. For the USA Sara Hughes/Summer Ross, Sweat/Walsh Jennings, Claes/Sponcil and Day/Flint will be competing.

Check out the official event page. 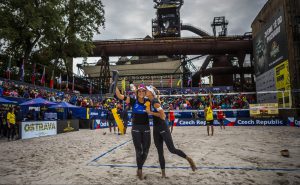 The FIVB World Tour returns to Ostrava (Czech Republic) with a US$300,000 4-star event. Qualification will be played from Wednesday, pool play kicks off on Thursday followed by elimination rounds on Friday. The medal matches in the men’s and women’s competition will take place on Sunday.
Defending champions on the women’s side are local heroes Barbora Hermannova/Marketa Slukova. They will be challenged by several Brazilian top teams such as Agatha/Duda and Ana Patricia/Rebecca, both reaching the final four at last week’s Jinjiang event. Jinjiang gold medalists Walsh Jennings/Sweat (USA) will also be competing as well as USA’s “A-Team” Klineman/Ross and Summer Ross/Sara Hughes. The field will be completed by Candian top teams Pavan/Humana-Paredes and Bansley/Wilkerson who missed the event in China.
For the men, Gavira/Herrera from Spain will try to defend last year’s title. Silver medalists Kantor/Losiak had to withdraw their participation but the second Polish top team Fijalek/Bryl will compete. With Mol/Sorum (Norway), Evandro/Bruno and Andre/George (both Brazil), all teams who made the podium at Jinjiang will compete. For the USA, four men’s teams are in the field, amongst them Tri Bourne and Trevor Crabb who reached the semifinal at Jinjiang.
Check out the full entry list here.
Read more
Categories: FIVB WORLD TOUR 4 STAR Tags: 2018/2019
May
30
Thu
2019
Nantong (CHN)
Tickets
May 30 – Jun 2 all-day 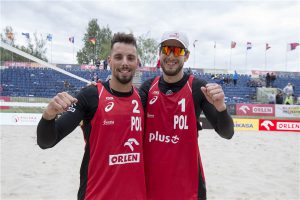 The Warsaw 4-star is the last stop of the beach volleyball world elite before the FIVB World Championships in Hamburg (Germany) will start end of June. The US$300,000 Warsaw Open qualifiers will be played on Wednesday with pool play following on Thursday. Elimination rounds will take place Friday and Saturday, the medal matches on Saturday for the women and on Sunday for the men.
Defending champions on the men’s side are local heroes Piotr Kantor/Bartosz Losiak who will not be able to defend their title due to Losiak’s injury. Therefore Piotr Kantor is teaming up with Mariusz Prudel. The men’s competition will feature most of the top teams such as Norwegian Vikings Mol/Sorum or AVP New York winnners Dalhausser/Lucena.
For the women, beach volleyball gypsy Brandie Wilkerson will return with her Canadian partner Heather Bansley after Brandie had joined forces with American Brooke Sweat at last week’s AVP New York Gold Series event. The Canadians will try to defend their Warsaw 2018 title against Jinjiang winners Brooke Sweat and Kerri Walsh as well as the Brazilians top teams Ana Patricia/Rebecca and Agatha/Duda who won bronze last year.
Check out the full schedule and all results at the official FIVB event page here.
Read more
Categories: FIVB WORLD TOUR 4 STAR Tags: 2018/2019
Jun
14
Fri
2019
Dresden (GER)
Tickets
Jun 14 – Jun 16 all-day

The 2019 World Championships will run from June 28 to July 7 at the Hamburg Rothenbaum Stadium with a total prize purse of $1.000.000. About 13.000 fans will follow the 48 teams per gender on centre court. New winner teams will be crowned as the defending champions teamed up with new partners. Current world champion Laura Ludwig (Germany) is playing with Maggie Kozuch after Kira Walkenhorst had to retire form professional beach volleyball in January. On the men’s side, defending champions Evandro and Andre Loyola (Brazil) have split up. While Evandro joined forces with Olympic champion Bruno Schmidt, Andre Loyola is now playing with George Wanderley after splitting from Alison.

The tournament schedule outlines pool play until July 3 in 12 pools of four teams with the top two teams from each pool going directly to the elimination round. They will be joined by the eight best third-ranked teams. These 32 teams will continue in single-elimination play with the medal matches being played on July 6 and 7. Top favorites are Norwegian Vikings Anders Mol and Christian Sorum who have already posted three 4-star wins this season at Itapema (Brazil), Jianjiang (China) and Ostrava (Czech Republic). They will play in Pool A. 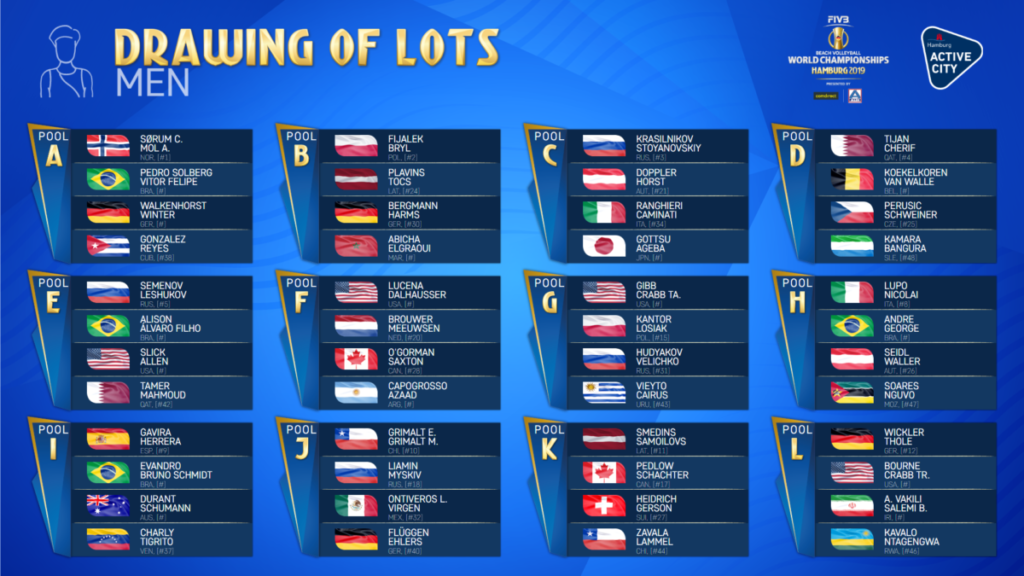 On the women’s side, Xiamen and The Hague winners Ana Patricia/Rebecca from Brazil will compete in Pool D. With eight centre court matches scheduled on Friday, German top team Ludwig/Kozuch will play their first match at 6pm against Warsaw silver medalists Larsen/Stockman (USA) who also won their first AVP title in Seattle last weekend. Evandro/Bruno who beat Vikings Mol/Sorum in the Warsaw final will play against Durant/Schumann (Australia) on Saturday at 2pm on centre court. For the exact court schedule, visit the official event page. 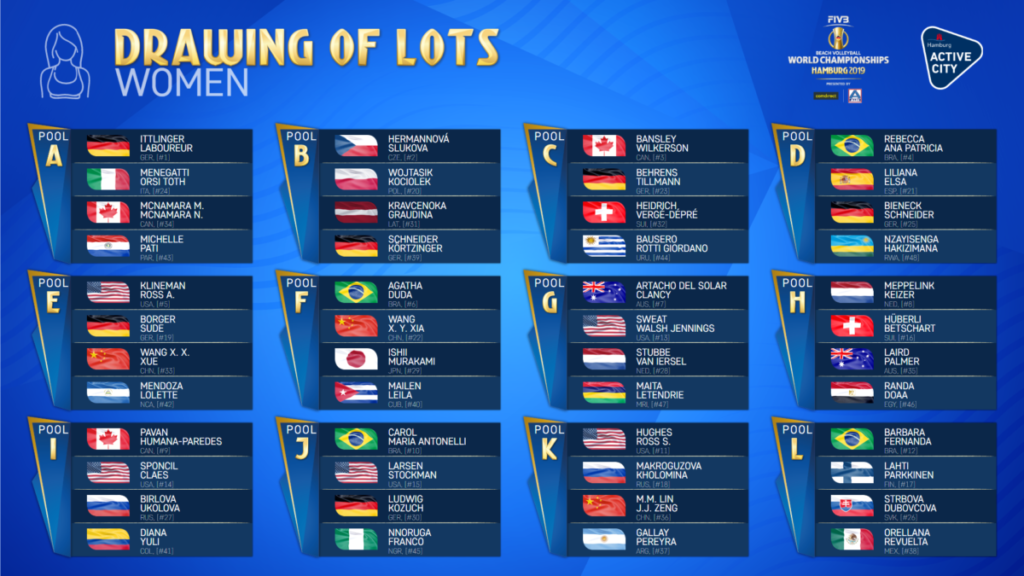 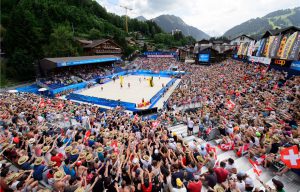 You can argue if it really makes sense to play a Beach Major Series event in the week right after the FIVB World Championships. After ten days of fierce competition, many teams might be physically and/or mentally exhausted. Nevertheless, the 20th edition of the Gstaad event will be played between July 9-14, 2019.
The $600,000 Gstaad Major qualifiers start on Tuesday and main draw kicks off on Wednesday. The finals are scheduled for Saturday on the men’s and for Sunday on the women’ side.
The new world champions Melissa Humana-Paredes and Sarah Pavan from Canada are also the defending champions after beating Germany’s Chantal Laboureur and Julia Sude in last year’s gold medal match. On the men’s side, Norwegian Vikings Anders Mol and Christian Sorum will try to defend their 2018 title that also kicked off their incredible run that ended in winning the Gstaad and Vienna Majors, the European championships and the World Tour Finals.
You can find schedule and results on the FIVB website.
Read more
Categories: FIVB WORLD TOUR MAJOR SERIES / 5 STAR Tags: 2018/2019
August 2018 – July 2019 Aug 2018 – Jul 2019